The CCTV cameras in my garden are working a treat! Yesterday I captured this wild weasel as she made a nest!

I first spotted her in the garden a few months ago and have been staking out her favourite haunt for a while.

I rigged up a camera into a hollow log and have been putting food inside in the hope of attracting her. I also put an old mouse nest in, just in case I was lucky enough to persuade her to nest in there!

She went into the log for the first time yesterday and as she did so I noticed a bulge in her pencil-thin body.

Sure enough the footage last night shows her quickly turning the nest into a dome and snuggling in to sleep for the night.

I can't believe my luck. She's taken straight to it. And she's already pregnant!!!

I might put some rabbit fur out tonight so she can line the nest. I can't wait now to see the kits! Fingers crossed!!!

Posted by Unknown at 12:31 PM No comments: Links to this post

My nest cams are so popular I've decided to extend my Easter Nest exhibition so that visitors to my gallery in North Yorkshire can watch as the eggs hatch and a new generation emerges in the garden this spring. 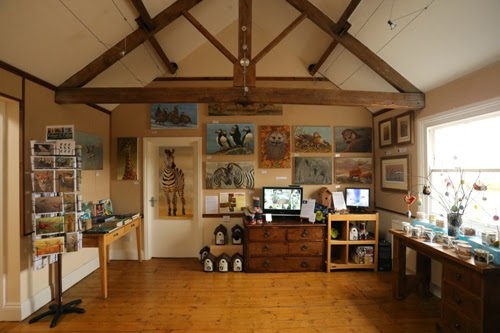 I have 12 secret cameras hidden in nest boxes in and around my garden and the grounds of my art gallery in North Yorkshire.

The images are then linked live to the exhibition space inside the gallery. So far the boxes are occupied by tawny owls, barn owls, kestrels, blue tits, wrens, blackbirds, robins, tree sparrows and even a pheasant hen. 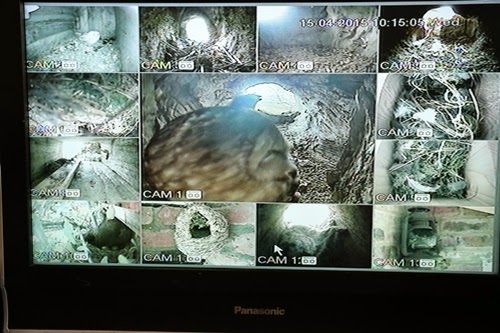 This week two tawny owlets and a new brood of blackbirds hatched. Meanwhile the barn owls, robins and pheasant hen are all sitting on eggs.


It was incredible to see the moment the cameras first caught the adult tawny owl shuffling on top of a chipping egg and then later captured the first tiny owlet.The next day there were two!

The cameras have also recorded some really dramatic moments: including a brutal fight between a kestrel and a barn owl over one nest box.

The two birds of prey repeatedly lunged at each other in the battle, which was eventually won by the barn owl. The kestrel has meanwhile moved to another nest box behind the gallery.

I am sharing the best action on my website every day so that visitors can keep up to date with each bird's story.

This one shows the male blackbird bringing in a worm for his new brood which he unceremoniously dropped on Mrs Blackbird's head!


Posted by Unknown at 3:01 PM 3 comments: Links to this post