What to do when you find a tawny owlet.

I have been watching a pair of tawny owls in the valley below my gallery for many years now. These owls and their offspring have inadvertently become among my most regular wildlife models and feature in so many of my paintings that I have a vested interest in keeping them here.

I made them a nest box out of an old beech tree stump which I hoisted into a tall sycamore where they roost, and so far they have nested in it every year. I also put food out on my bird table all year long for this tawny family. The owls have become so used to the arrangement that they will now bring their chicks to the garden to feed, which is wonderful because I can watch them from my living room window.

Tawny owls nest early. This pair usually lay their first egg in mid-March. The chicks fledge at four to five weeks old and are notoriously adventurous. They often start to explore their surroundings at just three weeks old, well before they have even learnt to fly. During this phase, called ‘branching’, they walk, climb, jump and flutter around in the trees at night. But the adults are never far away and locate them by their contact calls. It is not at all uncommon for owlets to spend time on the ground during this phase and for the adults to swoop down to feed them wherever they are.

Around this time I often get calls from customers saying they have found a chick, seemingly abandoned.  Thankfully tawny owls are very good parents and it’s rare that the chicks have actually been abandoned. Instead, more often than not, the owlet is perfectly okay and if it is left where it is its parents will find it.

Sometimes an overly daring youngster has had a mishap but you still need to be careful about moving it. If you come across one, the first thing to do is to make sure you have correctly identified it. If it is a tawny owl it will have grey-brown downy feathers and pink eyelids. If the feathers are white and the eyelids are dark then it is more likely to be a barn owl chick and in this case it isn’t a good idea to leave it where it is. Barn owls tend to feed their young inside the nest so a chick does need to go back in.

If you have a tawny owl and it has been in the same place on the ground for a long time I recommend picking it up and putting it on a nearby branch out of the way of predators. Tawny chicks are capable of clawing their way back up the sheer side of a tree trunk, so actually in the majority of cases you are best to let them find their own way. Apart from anything else, the parents can be very protective and you may get a very nasty hammering if you go near it. I’ve been knocked off my feet by a protective male before. It was like being hit with a brick. And I was wearing a helmet!  So it’s not a bad idea to don goggles and a hat if you’re going to pick one up, just in case!

The time to worry about tawny owl chicks is if they fledge during cold and wet spells. Their soft, downy feathers become waterlogged offering them no insulation and they can get very cold and perish. Also, if their feathers get wet, they can’t fly. 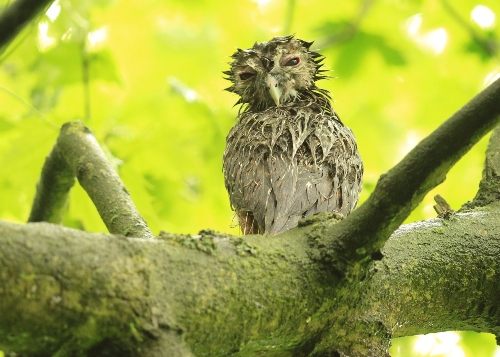 Once, two chicks from the sycamore in the valley below my gallery got caught out in several days of rain. They had only just fledged and were soaked to the skin, their feathers stuck fast to their tiny bodies so that there was no way they could fly to safety. The wet owlets were in danger of getting perilously cold so I scooped them up and brought them inside to dry off. 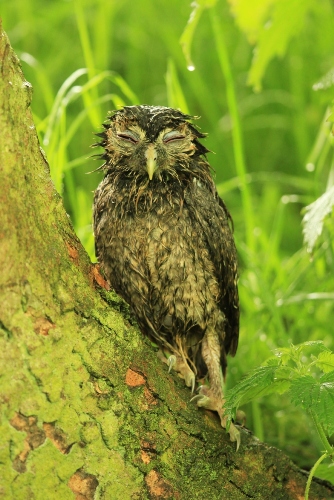 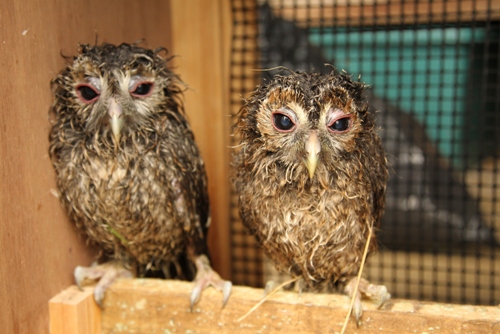 I used my wife’s hairdryer to gently fluff up their feathers. The sun was out by the time I got them back outside so I propped my ladder against the sycamore tree and quickly, before the adult pair could tackle me, popped them back into the nest hole. 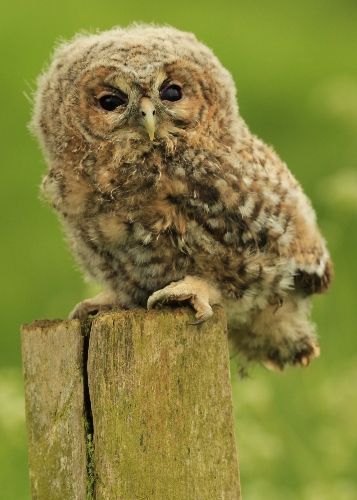 The owlets went on to thrive in my garden until September, when the adult pair drove their young out of the area to find their own territory. It gave me plenty of time to photograph them in various poses for future paintings.
Posted by Unknown at 10:16 AM No comments: Links to this post

Email ThisBlogThis!Share to TwitterShare to FacebookShare to Pinterest
Labels: caught out in the rain, tawny owlets fall out of the nest, wet tawny owl chick, what to do with a tawny owlet

I usually sleep with the window open, which means I wake up each morning to a cacophony of bird song. Before I get up, I like to test my knowledge by picking out which species are out there and what they are saying to one another.
As spring turns to summer this can become quite a challenge. The noise coming from more than 60 different species all singing at once at the tops of their voices gets very confusing. Particularly as some birds will mimic one another.
But learning the meaning of bird calls is crucial to understanding and studying wildlife in any depth. Next month I’m going to be sharing the knowledge I have gleaned over a lifetime of studying birds for my paintings at a special exhibition on British songbirds at my gallery in Thixendale, North Yorkshire.

Each bird species has a clearly identifiable song as well as a repertoire of different calls inferring different meanings. You get loud, melodic phrases sung by adult birds announcing their territory or trying to attract a mate. Blackbirds have one of the most tuneful of these harmonies. Then you hear more subtle, intimate contact calls made between breeding birds. A tawny male will trill like an ocarina to attract a mate.

And then again there are the urgent cries of chicks demanding food from their parents. Some chicks, like long-tailed tits or tree creepers, which tend to form small creches after they have fledged to keep one another warm at night, have developed their own distinct calls to keep in contact.

But the most important set of bird calls to learn is the alarms they shout out to alert one another when there is a predator about. Knowing these means you too can be alert to the presence of other wildlife.
Again it is worth mentioning the blackbird. These birds have an entire repertoire of different alarms signifying different types of predators. It is quite astounding how precise each call can be.

For instance, a soft, one-toned call means there is a ground predator about, possibly a weasel, stoat or pine marten; whereas a high-pitched, one-toned shrill, means a sparrowhawk in the air above.
However if there is a sparrowhawk perched nearby, sitting close to its nest for instance, the blackbird makes an altogether different sound. This time it is a continuous, chinking, harassing, call. This noise can also mean there is a tawny owl roosting nearby. Other birds, like wrens, chaffinches and greenfinches, often join in with blackbirds to shout down a predator. Together they can make a real din.When I am inside a hide my field of vision is limited and so I rely on these alarm calls. If I hear them I get my camera ready.
A traditional way to learn birdsong is to add lyrics to the tune. Yellow hammers have a familiar, nursery rhyme melody, which sounds like: ‘A little bit of butter and nooo cheeeese”. I recently watched five male red starts chasing a female. To attract her attention, they flashed their russet tails whilst mustering their very best harmonies. These striking birds, which are closely related to robins, migrate in large numbers to the Yorkshire Wolds each summer to breed. But despite their quantities, they are hard to spot. The trick is to listen for their noisy alarm calls and then stand still until they resume their normal activities.

My exhibition in June will feature a new series of paintings of British song birds as well as master classes on deciphering the dawn chorus and nature walks to learn birdsong in the wild.

Songbirds: Sounds of the Wolds runs from June 11th-July 3rd at The Robert Fuller Gallery, Fotherdale Farm, Thixendale. Please see my website for details and times of accompanying events.
Posted by Unknown at 12:01 PM No comments: Links to this post