I always have mixed feelings when I see sparrowhawks in my garden. 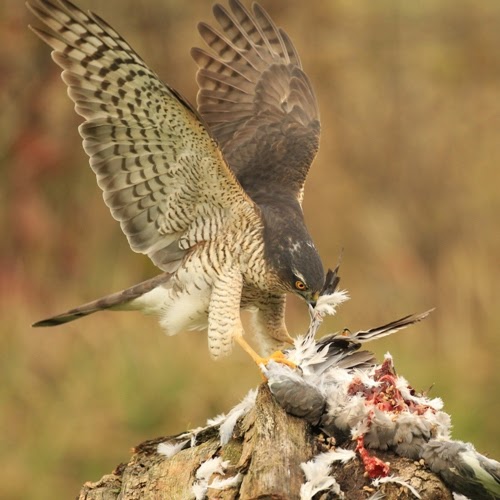 I can't help but admire their speed and agility, but they come in to my garden to hunt precious garden birds.

Over the years I have developed a technique to feed them an alternative menu. But it's not been easy. Sparrowhawks are true hunters and only hunt live prey, using movement to locate their prey.

I painted the above after watching a woodpecker escape detection by keeping absolutely still, even though it was so close!

But this means it is difficult to get them to feed from a particular spot in order to photograph them. Having said that, sparrowhawks don't always finish their meal in one go and often leave a kill half eaten to come back to.

So I have found that if I find a carcass from a new kill, I can replace it with something else without the hawk noticing. I have a freezer that I keep stocked with road kill. Mainly it is stocked with pigeon and rabbits. 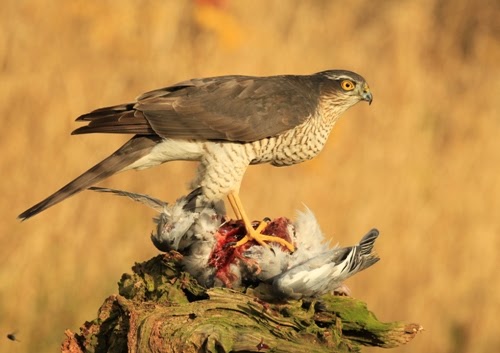 When the sparrowhawk returns to finish its meal it often looks a bit surprised to find what is often a different species to what it had left, but it tends not to pass up on this offer of a free meal.

I can move this new carcass a few metres every day until it is in a convenient place for me to photograph.

By using this technique I managed to get a female sparrowhawk to feed in the garden for six months and I got some great photographs of its daily dramas - especially when a young female turned up and fought it over the feeding station! (below) It was so dramatic  watching these supreme predators vying for position! 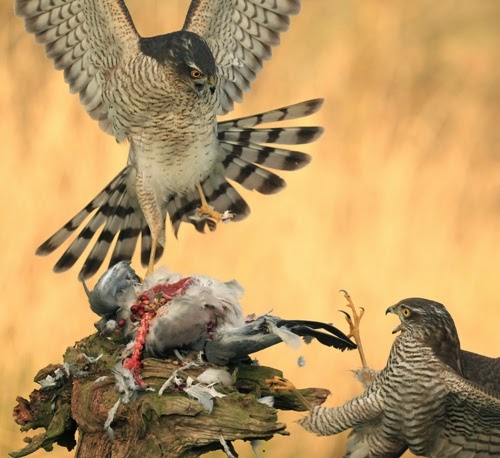 The older bird eventually won this battle, even though the younger bird was much more aggressive.

Unfortunately the older female left the garden this April. I expect she went away to nest. There is a new hawk here now,. When I first saw it flit past the window in late June, I thought it was the same one back, but this is a new female. 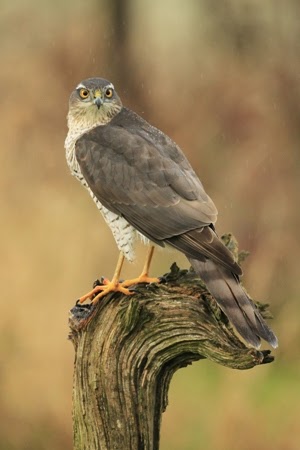 I have some good shots of her and also of another young female that has been visiting (pictured below), but I'm yet to be able to persuade her to feed here despite trying. 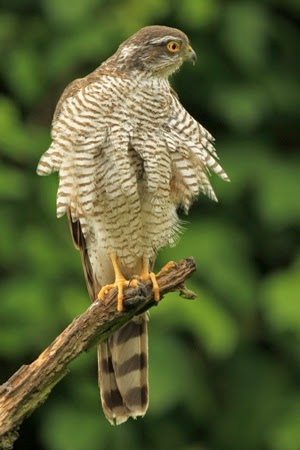 I hope I can get her to because I'm working on a new composition for a new painting of a sparrowhawk and I would like to have a painting model I can rely on!

This will be my new challenge over the next month. 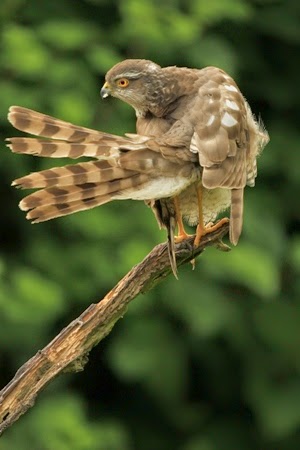 Posted by Unknown at 12:06 PM No comments: Links to this post

Email ThisBlogThis!Share to TwitterShare to FacebookShare to Pinterest
Labels: persuading a sparrowhawk to feed, sparrowhawk

I am currently exhibiting a new collection of paintings of wildlife in Yorkshire and after claiming that this county is teaming with incredible species I was challenged by Radio York to see what could be found in York city centre. 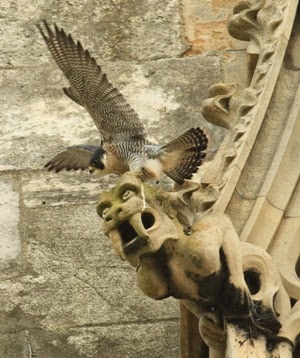 Before I took the radio interviewer on a wildlife tour of the city, I decided to go out on a 'reccy' and was delighted when one of the first things I spotted was a peregrine perched on  a gargoyle on York Minster. 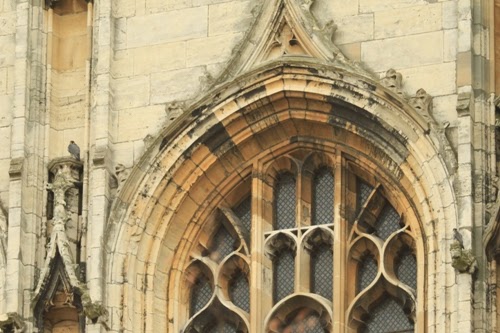 There turned out to be a pair there and I got this shot of the male and female perched on either side of the north window of the main tower . 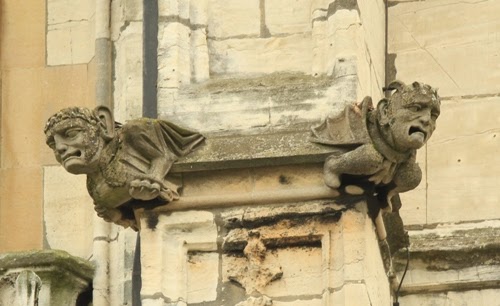 I spotted a pigeon skeleton draped over a gargoyle (pictured on the right hand gargoyle, above) and realised that the pinnacles of this impressive medieval cathedral are the urban equivalent to a precipitous cliff and represent a great vantage point from which to hunt pigeons. 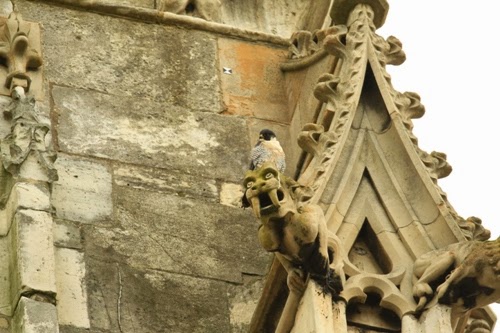 I watched the male as he eyed a flock of pigeons that had just landed underneath him. Then he started to flap his wings deliberately to frighten the pigeons. As they set off the peregrine lurched off the gargoyle into a spectacular stoop. 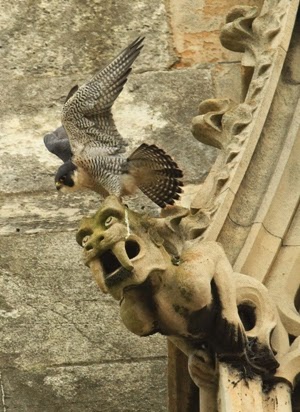 As the pigeons plummeted to the ground, tumbling and twisting through the air and swapping positions to confuse the peregrine, it dropped behind them with its wings pointed like a fighter pilot.

I could hear the wind rushing through the pigeons' wings as they pulled up over a small tree above my head and then I caught the sound of wind shooting through the peregrine's wings as it pulled out of its stoop .

He had missed but no doubt he would be back again. 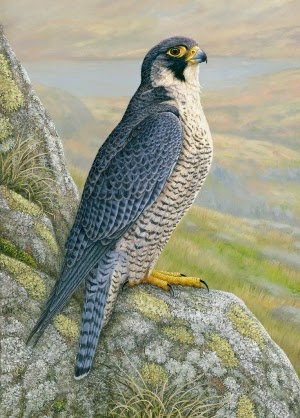 The experience was so exciting I decided to return later to see if I could get more shots to paint from. I have painted a peregrine before, see above, but I am now considering a new painting with the Minster ramparts as a backdrop!

And if the peregrine sighting wasn't good enough I then toured the rest of the city and watched a sparrowhawk hunting a pied wagtail right above the heads of shoppers along Parliament Street!

I also saw a pair of goldcrests and a flock of long-tailed tits in Museum Gardens. It's incredible how much wildlife there was to be found in the centre of the city and how few people seemed aware of the lives of the species all around them.
Posted by Unknown at 2:10 PM 2 comments: Links to this post

My exhibition on Yorkshire wildlife opens tomorrow and I've got lots to share about the wonderful variety of wildlife to be enjoyed here in Yorkshire. 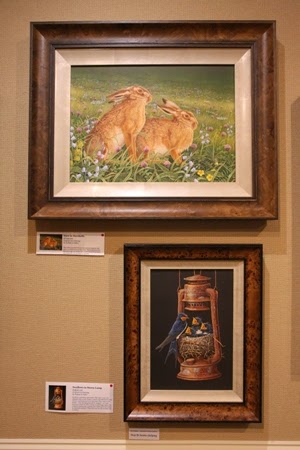 I'm planning to make a real 'Yorkshire fest' of the occasion and have today been captioning all my new paintings in Yorkshire dialect. The picture below of my new painting of puffins - which you can see at Bempton Cliffs on the Yorkshire coast - for instance has been annotated: 'Don't yer get shirty with me"! 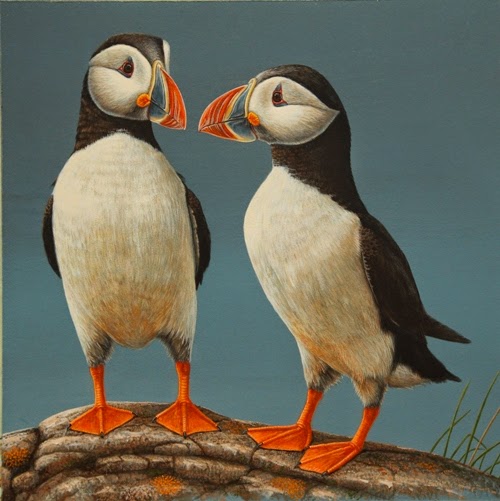 Alongside lots of new paintings, I've organised some fantastic events to encourage people to go out and see wild birds and animals themselves.

In keeping with the Yorkshire theme I've got a culinary food trail of the Yorkshire countryside and a popular York author coming in to the gallery to talk all about what a great county this is.
For details of all that's going on take a look at my website http://www.robertefuller.com/acatalog/EVENTS.html 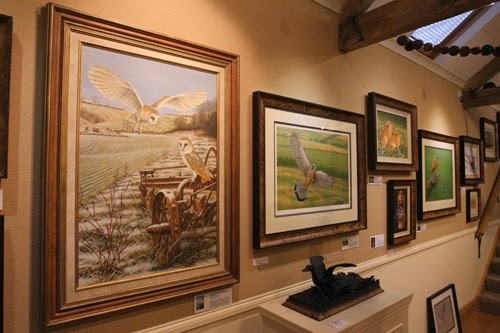 It's been a busy day hanging the new pictures, but I think they look good don't you? 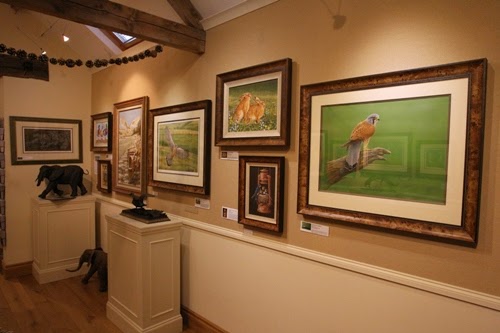 Posted by Unknown at 2:42 PM No comments: Links to this post

I'm just getting ready for my new exhibition all about the wealth of wildlife to be found in Yorkshire and I've been looking back at the remarkable breeding season we've had here in Thixendale -particularly in my garden at Fotherdale. 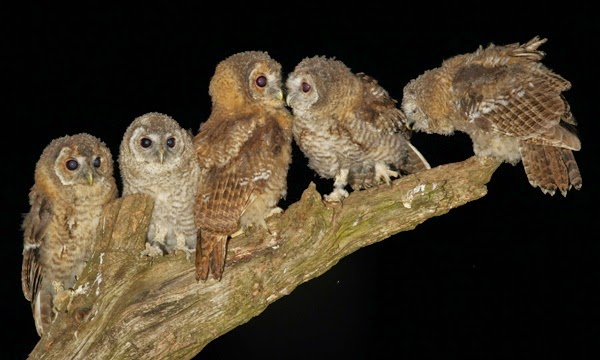 I've watched tawny owls, kestrels and swallows, from the moment they first searched for a nesting site to the first flights of their fledglings.

And I've been able to photograph them throughout, so that many of the birds now appear in my latest paintings. 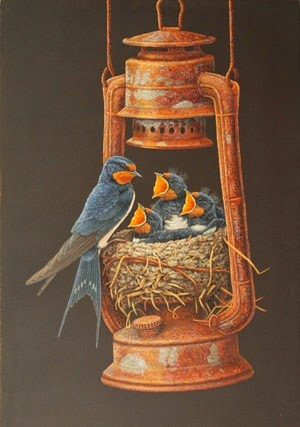 Among my favourite was this pair of swallows raising their chicks in a storm lantern hanging on my back porch! My painting of the event will highlight my new exhibition which opens on Saturday. This kestrel painting is also a new one and is the result of hours of watching and photographing the kestrel from the moment he won the annual tussle for the best nest box in Fotherdale.

My new nest box cameras have revealed new secrets, including the fact that battles for next year's nesting sites have already begun.

Two weeks ago I reported how jackdaws, kestrels and tawny owls were all vying for one particular box and the battle is still not over. This week I captured the tawny owl digging a nest scrape in it.

It seems that at the moment the kestrel has possession of it during the day and at night the tawny owl has it!

But of all the season's great breeding stories, I'm proudest of the barn owls. 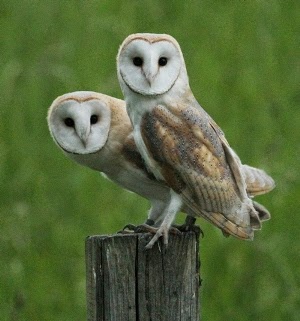 This pair live about a mile from my gallery and I have a particular interest in them after helping them through the previous winter with a daily supply of food.

They had become so accustomed to my daily offerings that if I stood very still the male would take food off the top of my hat!

Barn owls had a disastrous breeding season in 2013 and the restoration of barn owl populations in Thixendale depended on their performance this year.

And they didn’t disappoint. By Valentine’s Day this pair was loved up and already roosting in a nest box that I had put up for them. I had positioned the box opposite a tree-top hide so that I could watch the action at eye level. 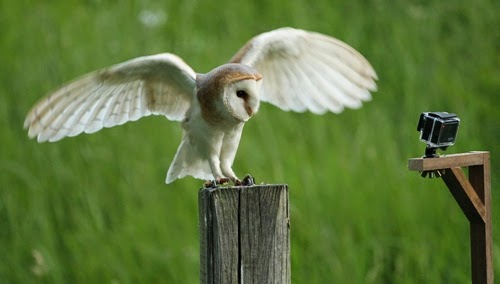 It was so exciting to be able to watch, via my new CCTV, what happened once they disappeared into the entrance hole to the nest box.

I became privy to their entire courtship process! It was endearing to hear the soft, chittering calls of the male as it appeared in the box to offer the female gifts of food and see the quiver of her wings as she replied. Whenever he entered the box she would physically tremble with submission.

The first egg was laid on April 1st and six eggs followed at three day intervals, with the last laid on Good Friday. For me these were precious Easter eggs because they represented real hope.

Only six of the seven fledged, but this was still a healthy proportion and I was delighted when not long after they had left the nest I saw the male mating the female again and she went on to lay five more eggs! 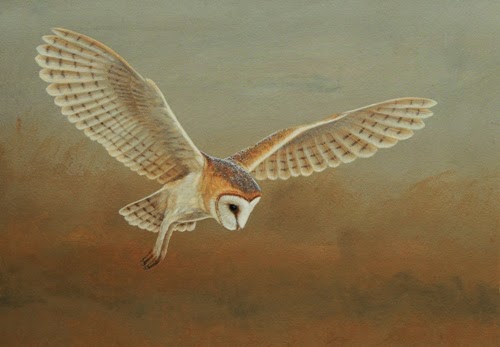 Again it's been great having new painting models about, but I'm so very pleased for the future of barn owls here on the Wolds.
Posted by Unknown at 11:18 AM 1 comment: Links to this post