Poor chicks are struggling with too large a morsel mum, tear it up smaller please!

Weasel in my garden

Take a look at this weasel I photographed in my garden!!! Weasels are incredibly difficult to watch in the wild, but I've got this one posing for me in front of an artful prop - should make a good painting!

Email ThisBlogThis!Share to TwitterShare to FacebookShare to Pinterest
Labels: artist captures weasel in his garden


I've set up a bit of a new idea of rehabilitating tawny owl chicks that are found either abandoned/ orphaned or mistakenly picked up by passers by. I've tried putting them into a wild tawny owl nest site that is just down the road from my gallery at Thixendale, North Yorkshire. It has been a tremendous success, tawny owls don't seem to be able to count and don't notice the additional chick. They go onto to raise them as their own 'wild' owl. Watch this video from the moment I put the chick in till it went onto fledge. See more on www.robertefuller.com
Posted by Unknown at 12:23 PM No comments:

The peregrines on York Minster are now nesting. I saw the male hunt a pigeon then perch on this gargoyle to prepare it for the female.

He then circled the tower, calling out to her. Then she emerged from a balcony and flew straight to the offering and tucked in. Meanwhile the male went back in to the tower to incubate the eggs.

This food pass was clear confirmation that the pair are now sitting on eggs.

The sighting inspired me to paint the picture below:

Posted by Unknown at 2:25 PM No comments:

Mr Blackbird brings in a worm for his Mrs and chicks

Tawny Owl chicks one week on

After an epic battle with a barn owl for possession of a nest box, the kestrel pair I have been watching moved off to a nearby nest box I fashioned out of an old elm stump and laid there instead.

The female has now laid a full clutch - five eggs - and is now sitting nicely. What a season it's been. Having 12 nestcams trained on nesting sites in the garden has made such a difference to how I watch wildlife.
I can now see what happens when the birds and animals disappear from my sight. I've learned so much about their lives.
My findings have inspired a new collection of paintings which I will be showing at an exhibition celebrating the wonder of wildlife at my gallery in North Yorkshire next month.
Here is a sneak preview of some of the pieces I still have to finish off: 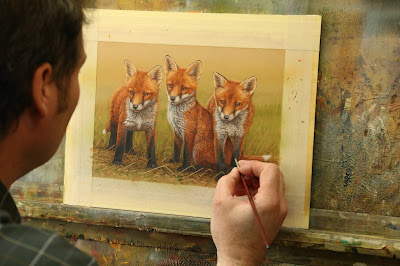 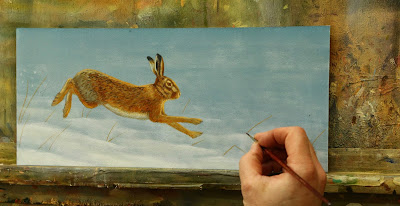 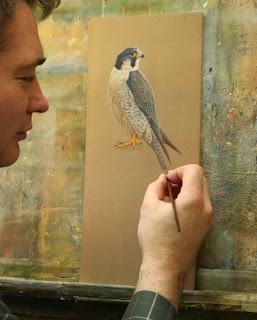 Posted by Unknown at 2:35 PM No comments:

Tawny owls make excellent parents. So caring in fact, I've found they will even take on foster-chicks. Last year I put this nurturing instinct to the test by giving a pair six extra owlets to raise. 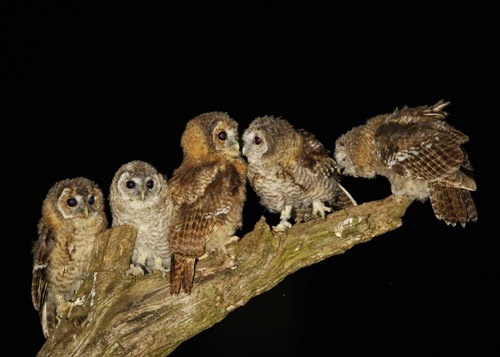 They barely batted an eye - despite the fact that they now had 10 chicks! I helped them along by putting extra food on my garden bird table every night. 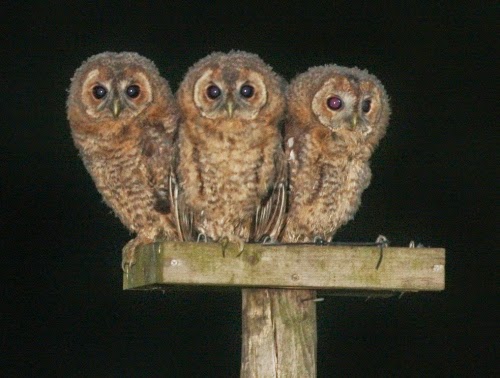 The adult pair took on the role of feeding all these extra mouths and raised them until late August. I took advantage of their presence and got some great photographs of these owlets as they grew up right outside my living room window. These pictures went on to inform my paintings. 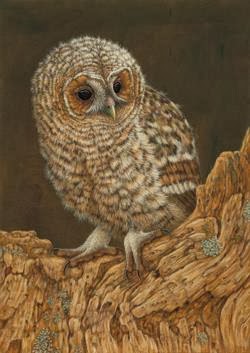 This year I repeated the process after an owlet was handed to me. The video below shows me adding this chick to the nest whilst the tawny adult was away. I'm wearing a helmet because tawny owls can be very dangerous and are very protective if they discover you near their nest.


I’m often asked to find a foster family for tawny owl chicks, because these owlets are so adventurous they leave the nest too early and then get into trouble.

People find them on the ground where they are vulnerable to predators and then hand them into their local vets or wildlife rehabilitation centres.

It is far better to try to restore them to their own nest. If that is not possible, then the next best thing is to pop them into the nest of a wild pair so that the chicks are raised in a more natural environment.

I've tried this with barn owls too - and been successful - but it isn't so often I'm handed barn owl chicks to raise.
Posted by Unknown at 2:32 PM No comments:

Email ThisBlogThis!Share to TwitterShare to FacebookShare to Pinterest
Labels: foster owls, parenting in the wild, video footage of tawny owl taking on a foster chick

Caught on camera!!! We see you!! This cheeky blue tit was caught red handed stealing moss from a wren's nest then taking it back to line its own nest box!

Watch to the end to see the wren come back and look about the nest, all confused. You can almost see it thinking: "Where's that moss gone?"

Earlier in the season I watched this wren spend ages carefully positioning this moss at the front of the roosting pouch as it built its nest. Poor thing! 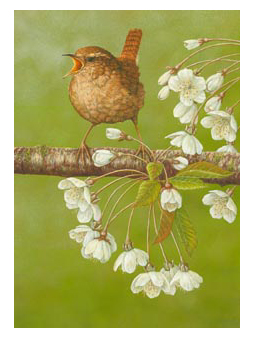 Wrens often nest in my front porch and I paint them often, as above. It's been great to watch their comings and goings via the nest cam this spring.

All the nest cams in my garden are proving a real draw in the gallery and people are so keen to follow the stories of each bird.

The kestrel has just laid an egg and the blackbirds are almost ready to fledge, but the cutest at the moment are the tawny owl chicks. Watch their mother feed them by clicking the utube link below.

I've uploaded the best of the footage I've been getting onto my website. Click here to watch it: