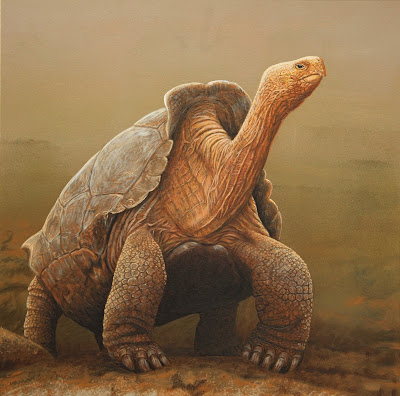 Super Diego, who is more than 100 years old, is almost solely responsible for bringing his own subspecies, the saddle-backed Espanola tortoise, back from the brink of extinction. With 12 females to mate with, this rampant tortoise is believed to have fathered an estimated 1,700  baby tortoises since being introduced to a crucial breeding programme on the remote Galapagos Islands.

Super Diego had been living in a zoo in , , when he was picked to join the breeding programme.  At the time there were just 14 Espanola tortoises left in the world, 12 of them females. It is believed that he brought a healthy genetic strain to the threatened population and his contribution is hailed as helping restore the threatened species.

I painted this portrait of the rampant giant tortoise after visiting The Galapagos Islands in 2014. This spring I am due to return to the Pacific archipelago and will be leading a guided tour of the unique wildlife there. If you are interested in joining this chartered luxury cruise around the islands please follow this link to my website for details.

You can see this painting at my gallery alongside a collection of other paintings that celebrate animal courtship on Valentine's Day.

Posted by Unknown at 12:06 PM No comments: Links to this post

This weekend is the RSPB annual ‘Big Garden Birdwatch’, an opportunity for us all to help the conservation charity count up Britain's bird species.

This national counting exercise is, in fact, the largest citizen-nature observation in the world, and last year around 500,000 people got involved. I think it is a great thing to do and usually take time out to count the birds in my own garden with my two young daughters.
It only takes an hour and the great thing about it is that you can choose when you would like to sit and do it during the course of the weekend.

I usually make myself a brew and then sit down with my two girls. It's great fun getting the kids to tick off the birds we see on an identification sheet downloaded from the RSPB’s Big Garden Birdwatch website.

I have found its also a great way to teach them how to identify different species. Usually I find that I identify a bird by its sound, and can usually tell which bird is about to appear on the scene before I've actually seen it. The girls think it is amazing that I know when a particular bird is going to show up. Learning bird song isn't as hard as it seems. There are quite a few identification CDs on the market, although I admit that I am a bit of a technophobe and prefer the old-fashioned way of learning in the field and gradually building up my knowledge.

It has taken me years to develop this skill and, although it does not happen that often, I still get caught out once or twice with a species I don’t know so well and sometimes I get a surprise when one bird mimics another. Still my daughters find it impressive since I do know the repertoire of different calls and songs that each bird has and can tell if a bird is simply announcing its territory, raising the alarm or calling another adult or young - which means I can usually point to young chicks or a predator with some accuracy.

The bird-feeder outside my studio window is usually teaming with birds and when we sit down at home to count them it isn’t long before the girls start shouting out ‘sparrow’ or ‘blue tit’.

But trying to get an accurate figure of how many of each can be amusing since they flit about so fast.  My house is very rural, so I get a wide variety of birds, including dunnocks, fieldfares, bramblings and red wings.
The RSPB has run this event for 30 years and relies on the results to create a snapshot of bird numbers in each region, gaining a good indication of where there are serious dips in bird populations. Last year the friendly blackbird was the most observed bird, but other common species included robins, wrens and song thrushes. But the count also revealed continuing serious declines among species like house sparrows, greenfinches, starlings and song thrushes.

Don't forget to get counting the birds in your garden this weekend! Getting involved is easy, and the RSPB offer a free bird watching pack to help you get started. The idea is to identify and count as many different birds as possible in an hour. You can then submit your observations online via the RSPBwebsite.

Posted by Unknown at 2:05 PM No comments: Links to this post

Email ThisBlogThis!Share to TwitterShare to FacebookShare to Pinterest
Labels: Big RSPB birdwatch;, counting for RSPB, getting kids to help count, identifying birds in your garden, teaching children how to ID birds

As a wildlife artist, goats are not normally a species I would consider as a subject for a painting. However, there is a wild herd that roam the mountains near my parent’s home in North Wales that often catch my eye. These creatures descend from domesticated herds and look eerily prehistoric. 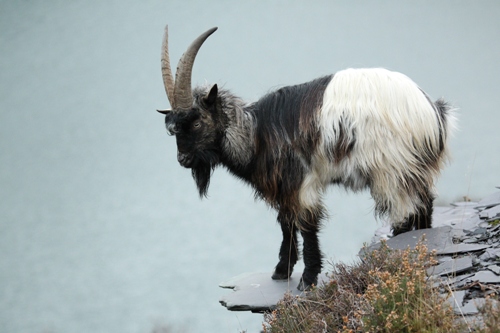 I decided to make the time to watch them a little more closely. It was mid-winter and my father told me of a herd living in a disused slate quarry close to a sessile oak woodland.

These sure-footed animals are believed to originate from the Middle East and were brought over to this country by Neolithic man, who prized them for their skins, meat and milk. Iron Age farmers went on to use them, possibly because they were the only livestock that could graze Snowdonia’s precipitous crags. But the number of goats declined in the 19th century when they were replaced by sheep after the price of wool soared. The goats that were left became feral and were confined to the mountains in small isolated herds.

This herd was surprisingly difficult to locate. After an afternoon’s ‘recce’ which involved climbing up the steep sides of the slate quarry, I spotted the herd in a different, smaller, quarry. The next morning I set off long before dawn, in spite of heavy rain. I took my torch and shone the beam down to the ledge into the quarry. I could just make out their shapes in the mist. I made my way carefully down towards them, stopping 30 yards away and sheltering by the quarry face until first light. I wanted the goats to know I was there so that they could get used to my presence before I started to photograph them. But I was unsure how they would react to me. 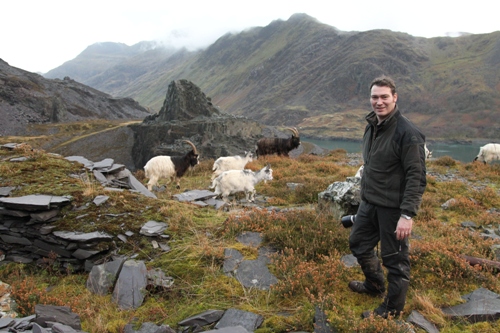 As I took off my heavy rucksack they turned and looked my way. They kept a careful eye on me but did not move away. As the morning light began to penetrate through the mist the males, or billy goats, stood up and stretched before picking a route over the scree up to the top of the quarry. There was no way I could follow them along this dizzying route so I took the long way around the edge of the quarry.

By the time I had caught up they were grazing in the dense oak woodland that surrounds the quarry.
The goats nibbled at holly and bilberry bushes. They pruned back heather, swallowed bark, twigs, grass and even ate moss.  The saying that ‘there is nothing a goat doesn’t eat’ was evidently true and it occurred to me that this herd were actually shaping the forest floor.

All over the world I have seen how goats can destroy habitats by overgrazing them. But it was clear that here in this wet, unforgiving climate a small population is sustainable. Their population is managed and culls have taken place officially and unofficially over the years, but they have become quite iconic in the area and I doubt that they will ever be totally eradicated. 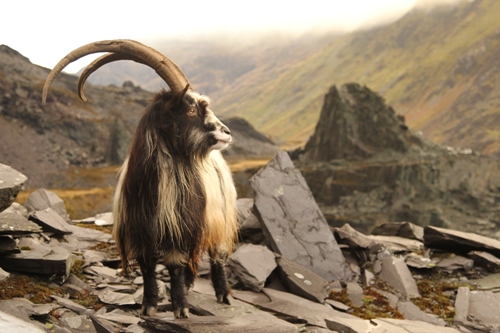 I followed them through this ancient woodland, where the tree branches were twisted and coated with moss and lichen dripping with water. It felt almost primeval, as if I was some kind of ancient herder. Back in Neolithic times wolves, bears and lynx would also have stalked these herds.
There was evidently some tension between the billy goats as they approached the females. Occasionally I got photographs of tussles between them.

By early afternoon it stopped raining. The herd wandered out of the forest gloom and into the old slate quarry. They passed the remains of tiny cottages where the slate workers once lived. I photographed them here standing dramatically against the stark mountainous landscape that is typical of Snowdonia. 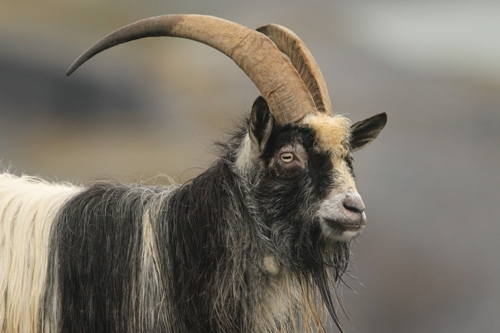 They continued on heading down towards some of the lower levels of the quarry. One billy goat accidentally bumped into another, causing it to turn and fight. They both reared up on their hind legs before crashing down on one another. As their horns clashed the noise echoed off the slate walls. Argument resolved, they turned and headed on with the rest of the herd. These were the photographs I had hoped for. I crawled to within three metres of one billy goat, but stopped short when he lowered his horns and eyed me silently. I hope to capture that wild, prehistoric look in a future painting.
Posted by Unknown at 1:35 PM No comments: Links to this post