Cracking Christmas Offers - Order Before Christmas to Get Great Deals

With just a few shopping days left before Christmas, I've put together a fantastic range of special offers to help you with those last essential gifts. 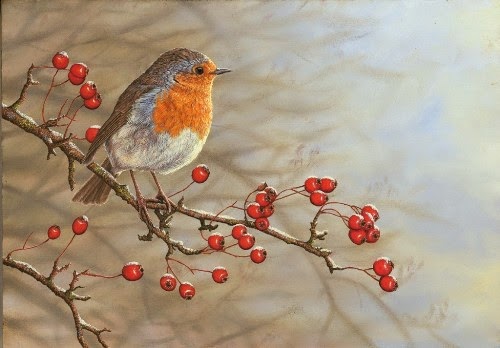 My Christmas cards are all half price if you use the offer code: 'RUDOLF' when ordering. Click here to order. 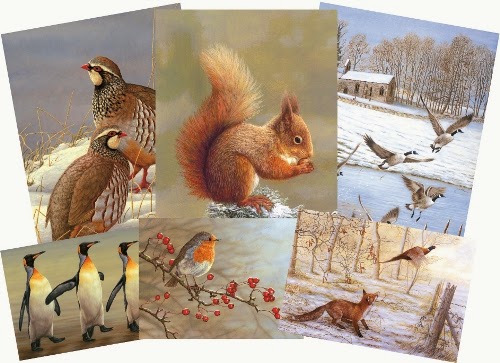 My 2015 calendars are going like hotcakes. Get one half price if you quote XMASELF when you order. But hurry there are only a handful left. Click here to order. 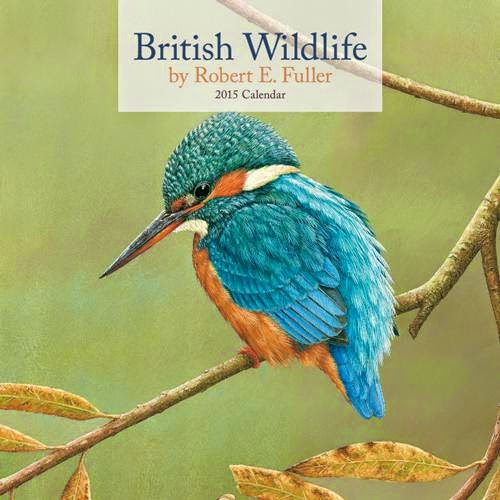 And for a fantastic money-off deal on my wildlife art prints quote the offer code MINCEPIE to get £10 off when you buy any print or quote SNOW to get £20 off any two prints. Click here to order.
Posted by Unknown at 1:39 PM No comments: Links to this post

Leave Your Apples for the Fieldfares

I planted 1200 trees to create a woodland on what was a bare hillside behind my gallery in 2006. This wildlife haven is really coming into its own now. It has attracted so many new bird species to feed from the berries and insects there and to nest in the branches. 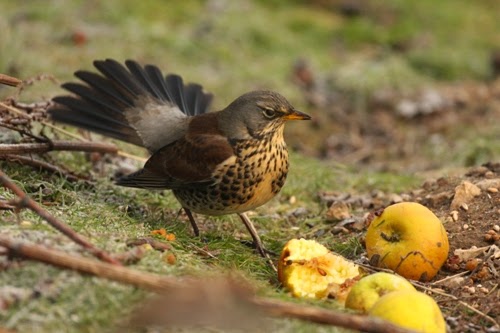 Among the trees I planted were some apple trees. I tend to leave the windfall apples on the ground for the birds but recently I've also begun to put a few out in my front garden for the fieldfares. 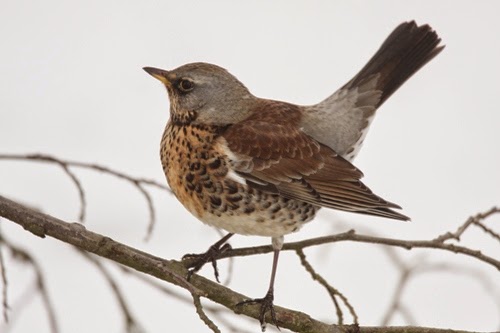 These colourful members of the thrush family are mainly seasonal visitors and their arrival from Scandinavia is an indicator of the onset of winter.They eat worms and berries such as hawthorns, but during very cold frosts they will venture into gardens where they are partial to fruit. 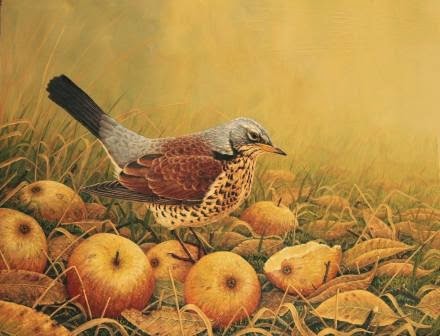 I like the touch of colour and cheerful chattering noise they bring to the garden at this time of year and painted the above picture after watching a flock feeding on apples I left out for them. 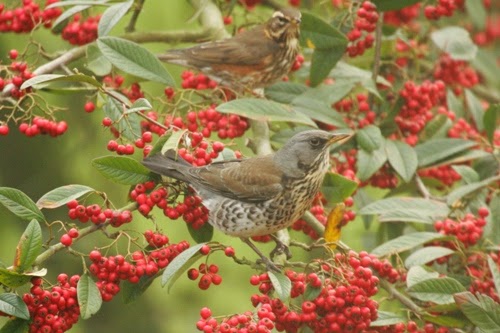 The woodland is also planted with cotoneaster bushes which tend to berry later in the season, providing another supply of food for the fieldfares.
Posted by Unknown at 8:30 AM No comments: Links to this post 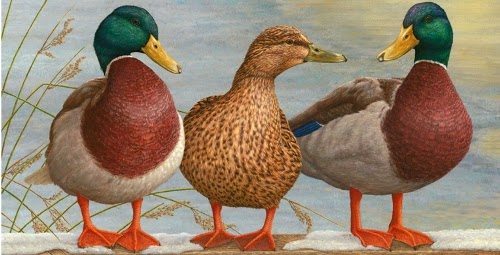 My Winter Art Exhibition is now over and this week I've been wrapping up the original paintings that have been sold ready to go to their new owners. These include the above painting which I named 'Mallards and Lady' and  the more summery image of hares in harebells below. 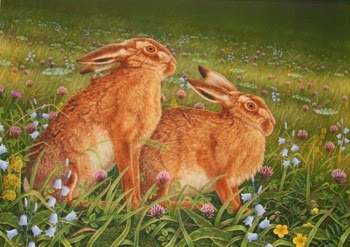 Of course it's nice to sell a painting, but I always feel a bit of a pang when they go. 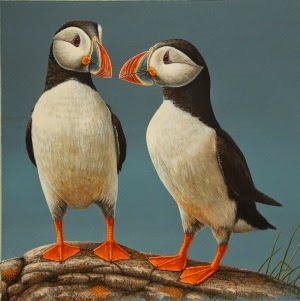 These puffins and the seagull below are particular favourites. 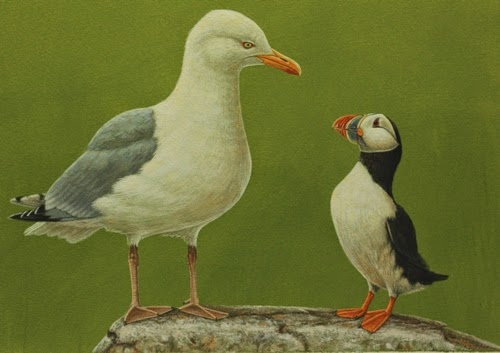 Each picture brings back a memory. The swallows that nested in the storm lantern I hung in my back porch (see below). They nested very late in the season - I wonder if the chicks made it back to Africa safely? 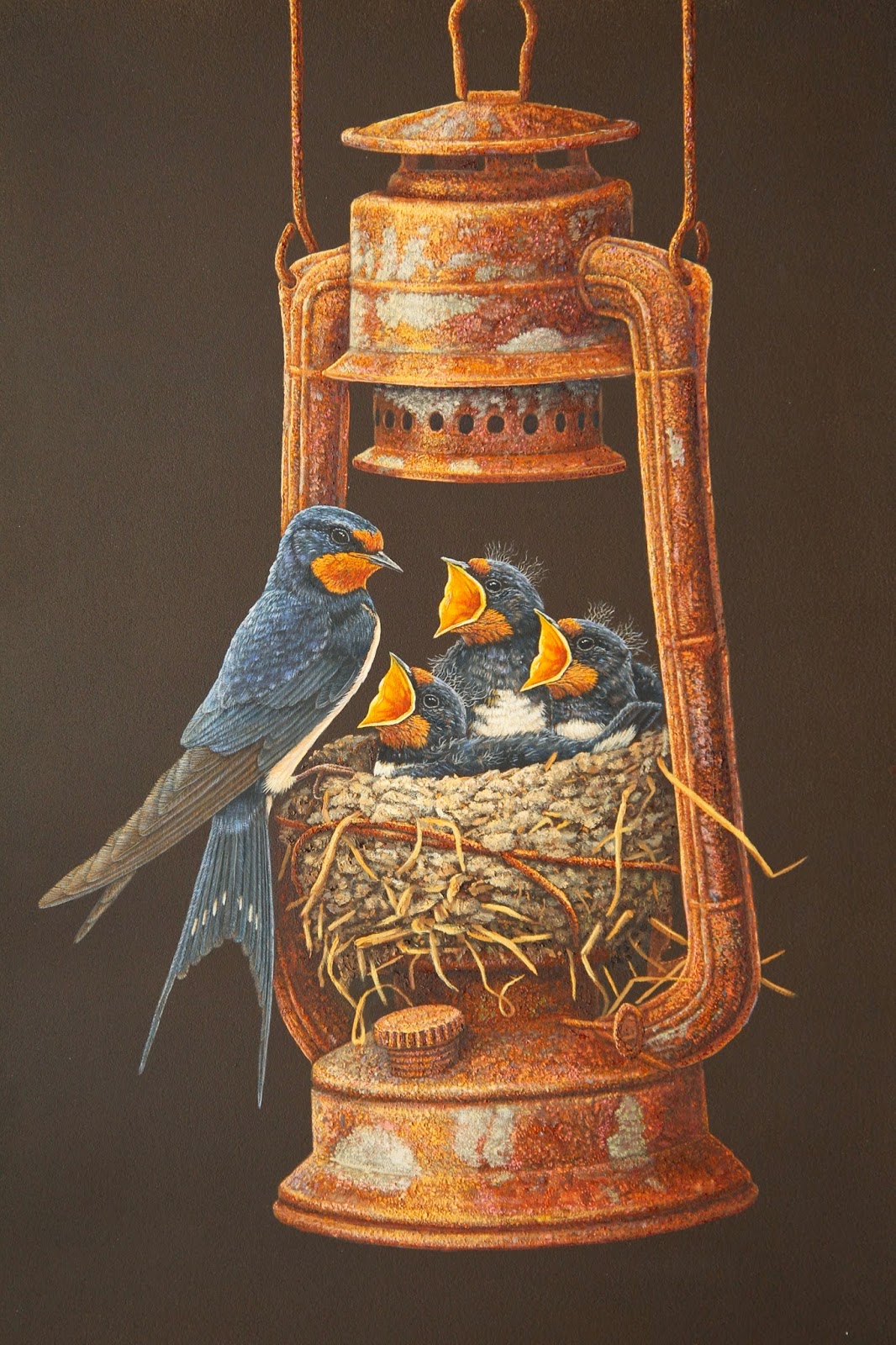 I also sold my picture of blue-footed boobies which I painted after my return from the Galapagos Islands in May. 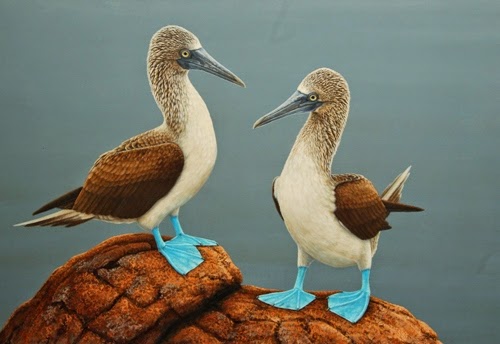 This painting won't go to it's new owner until January, as it is currently on exhibit at The Deep in Hull. The exhibition is to support the popular aquarium's efforts to raise funds for the Galapagos penguin, one of the rarest penguin species in the world. 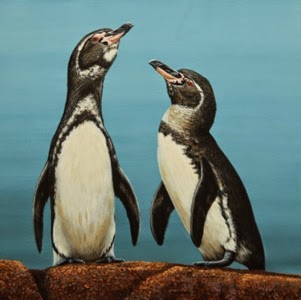 My painting of these adorable penguins, pictured above, is the focus of the exhibit and featured on ITV's Calendar News this week.

It's been a very full year and the exhibitions have kept me busy, but now that the pressure is off I am beginning to look forward to some new wildlife watching projects during the run up to Christmas and beyond. 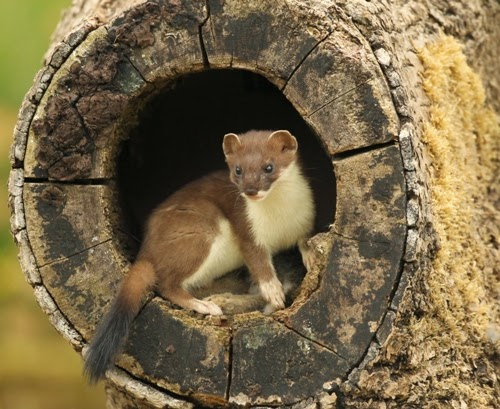 My first plan is to re-focus on the stoats that visit the garden. In the Autumn, one of the male stoats became territorial and chased his siblings away. He visited regularly and I was seeing him two or three times a day. But unfortunately he was run over on the road outside my gallery. I didn't see any stoats for two weeks after that, but I kept putting food out just in case. But then, one of the female siblings returned to the feeding station. She has now become a regular, and of course a female is better news for me. If she stays until next summer she may have stoat kitts in the garden. Watch this space....
Posted by Unknown at 10:00 AM 1 comment: Links to this post

Painting Peregrines in the City 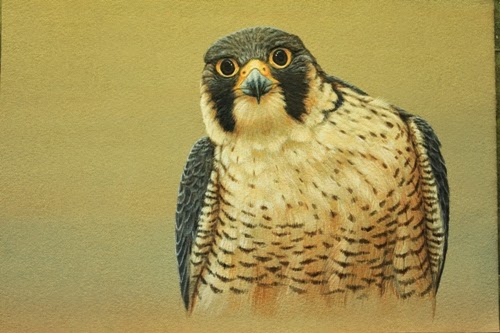 I've been putting the finishing touches to this acrylic study of a peregrine falcon this week. 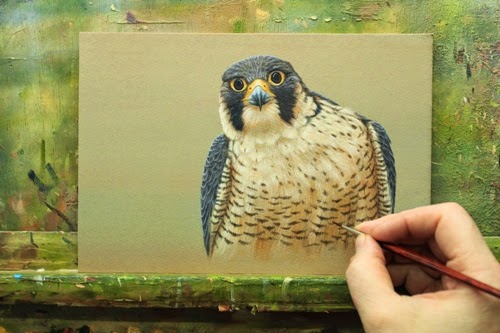 I was inspired to pick up my paintbrushes after watching a pair of peregrines hunting from the medieval pinnacles of York Minster a week ago. This a painting of the female. 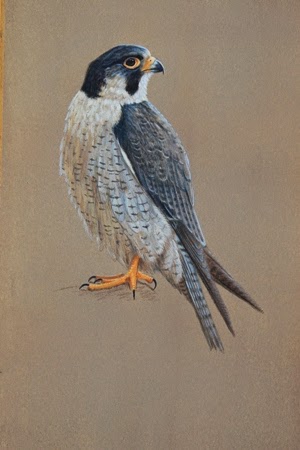 I've also painted the male (above) and am planning to perch him on a gargoyle in the final picture. These cathedral carvings are so impressive. I think they really complement this magnificent hunter. 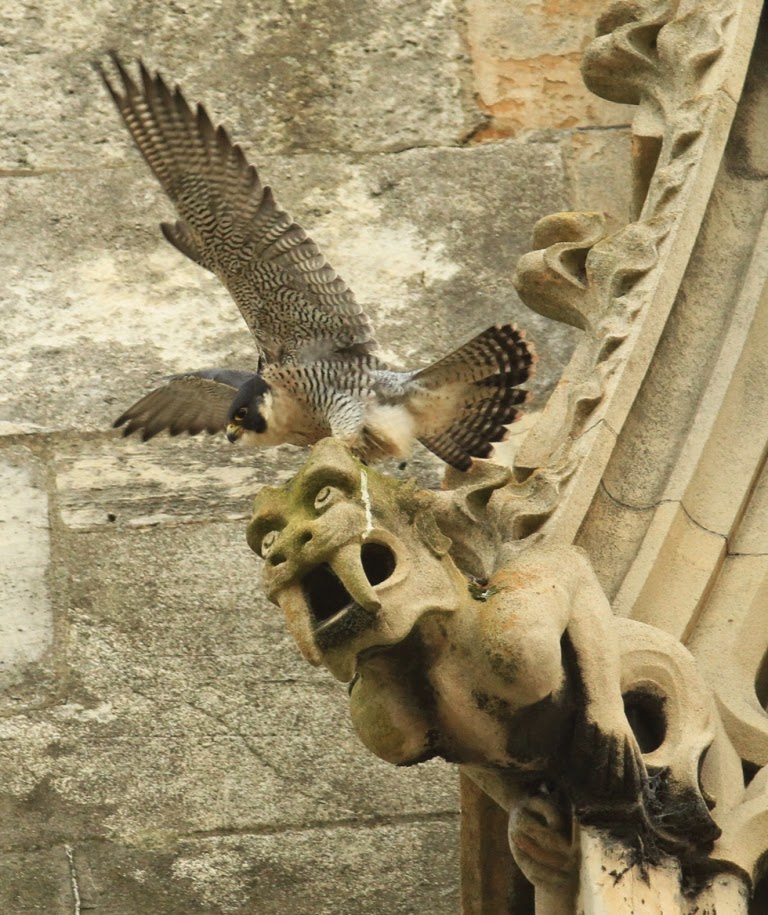 I first spotted this pair during a tour of York's city centre to promote my latest exhibition, which is all about the wonderful wildlife that we have living amongst us here in Yorkshire.

I had been challenged to find wildlife in the centre of a city and had been surprised at how much there was to see. I watched a pied wagtail roost and spotted long tailed tits and goldcrests in the city gardens. 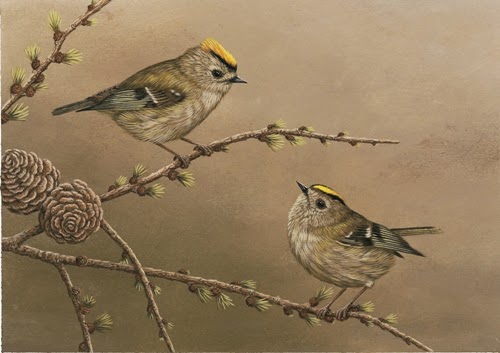 And since my visit I've heard of a grey wagtail roost near the City Screen cinema on the riverbank.

On Friday BBC Look North joined me on a tour of the city to see what else we could find. It was great to watch the reaction of passers by when we told them we were filming a peregrine falcon!

People who visit my gallery here in Thixendale, North Yorkshire, are always telling me that I'm so lucky to live here on the Yorkshire Wolds where the wildlife is so abundant.

Of course I am lucky, but wildlife is everywhere and I think if you look hard enough, even in the most unexpected of places, you can enjoy some incredible spectacles.

If you can watch the fastest bird in the world on the Minster in York, you can enjoy wildlife anywhere!
Posted by Unknown at 3:25 PM No comments: Links to this post