Recently I visited one of the country’s most important wetland reserves run by the RSPB at Leighton Moss.
I arrived shortly after dawn and watched the sun come up. Most of water was partly-frozen, but it still reflected the dawn light perfectly.
The first two birds I saw were two hen harriers, silhouetted against the dawn sky as they hunted low over the marshes.
As I opened the shutters of the nearest hide I could hear the calls of teal, wigeon, mallard and grey Canada geese. I couldn’t see them, but sound travels far in the still cold air.
I realised there must be a channel of unfrozen water behind the reed bed. Looking at the map I found a way across the causeway and began to head off in the direction of the noise.
I soon found the channel teaming with ducks. There were shoveler, gargeney, teal, mallard, grebes and swans – all sharing the same small space.
I headed to the nearest hide, but frustratingly, the ducks were still too far away.
Then I heard a fellow birdwatcher beside me say ‘I’ve got the otter’. I looked across to the other side of the lake with my binoculars and could just make out an otter in the distance. It was on the edge of the reed bed and was running out on to the ice. 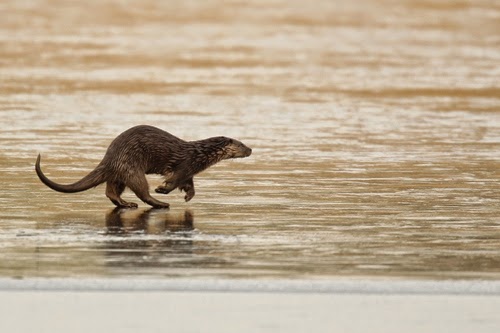 I decided to walk to a hide closer. I set off along the causeway, where a sign informed me I had 460 metres to go.
I set off along the path with just the reed bed in view. There was plenty to hold my attention as I walked: wrens, robins, reed buntings; I knew there would be bearded tits too, although these remained elusive. I spotted this too and couldn't decide what it was. Marsh or willow tit? 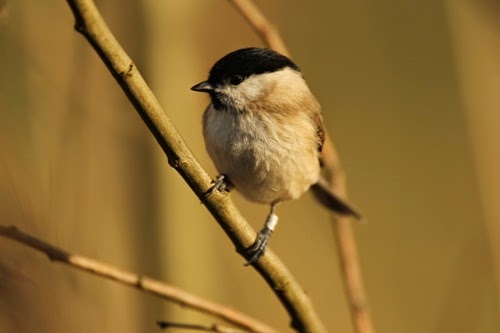 I spotted fresh red deer slots on the path in front. I looked through the reeds and spotted their body shapes through the criss-cross of reeds. They raised their heads and looked in my direction but there was no time to stop.
At last I entered the hide. It was still early and I was the only one in. I opened the hatch, but I couldn't see the otter.
In fact I couldn't see much at all. But the longer I sat there, the more emerged. I spotted a snipe, on the edge of the frozen lake and then another one crouched in the grass, perfectly camouflaged. 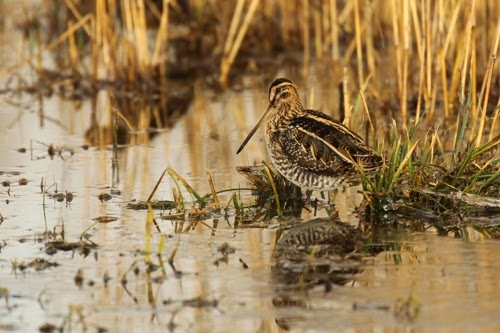 And then the marsh harrier was back, hunting over the reed beds.
Then a quivering reed caught my eye. I looked through my binoculars down at its roots and there was nose of a vole tugging at it. Suddenly the vole felled the reed and began tugging it away.  I watched amused as the tiny vole felled reed after tall reed.
A couple of hours passed in this way and I was wondering whether I would see the otter again. By this time the hide was filling up with other birdwatchers – there were now more eyes to look. Then someone from the far end said ‘Otter on the ice!’
By the time I got to the other end of the hide the otter was heading back into the reeds. I waited at that end of the hide, which had a different view over the frozen water.
There were some small patches that weren't frozen and here there were more snipe. I could pick out five. They were probing their long beaks in to the mud to feed on invertebrates. 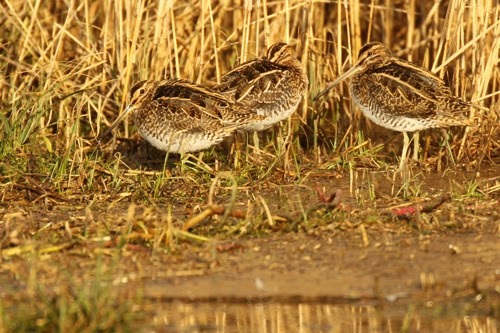 Then the otter was back on the ice. It hesitated for a short while. There was great excitement in the hide.
It ran 60 metres across open ice to another reed bed. It was great to see its lolloping gait as it ran.
Focussing my binoculars I noticed there were in fact two otters, a mother and cub. They were hunting under the ice.
As they came out of the water, their bodies lifted pieces of ice. The cub started to play with a bit of ice that had broken.
It was using it like an ice hockey puck; flopping onto its belly and pushing the shard of ice along with its nose and front paws. It was great to see them acting so playfully in such cold weather.


The otters looked so clear against the icy backdrop that I couldn't wait to get home and begin sorting through some suitable compositions for a painting. Below is an otter I painted some time ago and right at the top an acrylic and pencil drawing of one running. 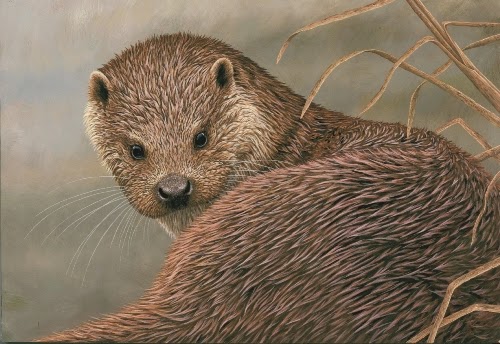 Posted by Unknown at 2:38 PM No comments: Links to this post

Email ThisBlogThis!Share to TwitterShare to FacebookShare to Pinterest
Labels: marsh tit or willow?, otter on the ice, RSPB Leighton Moss

I've managed to get a better picture of the white stoat I've been watching. 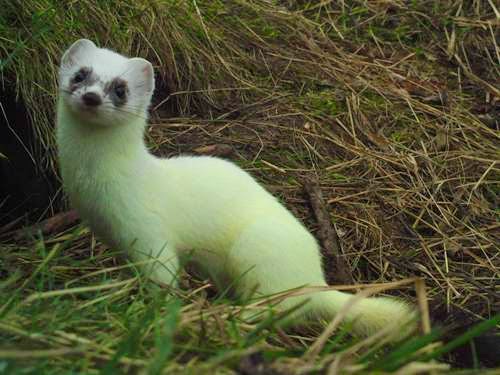 It is still very elusive though and recently sightings have been particularly unreliable because buzzards, crows and even a rat have begun eating the rabbits I put out for it. 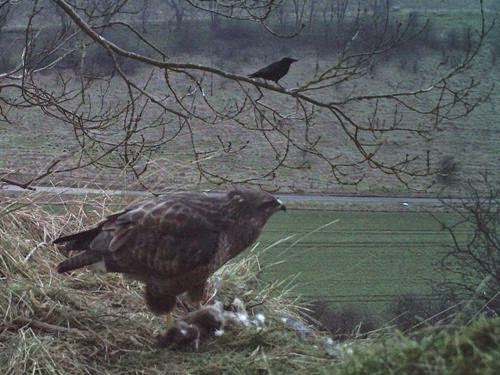 I captured it on video tool See below.

These sightings have inspired me to keep trying to photograph it and I have now built an underground feeding chamber for it which the buzzards and crows, at least, will not be able to get to.
Posted by Unknown at 3:22 PM No comments: Links to this post

Here it is! My stoat agility course in action.

If you remember from my last blog I've only just finished making it and the stoats have made barely stopped in their tracks. I'm going to have to make it harder!

I've got some really great pictures of them now and am already so inspired I've begun a new painting. 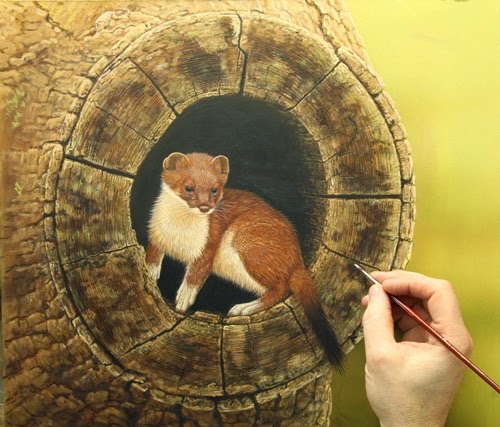 The agility course, and the fact that I have stoats in the garden, has caused quite a lot of interest and this week Mike Dilger from BBC's The One Show came to film them! It was great to meet all the crew. 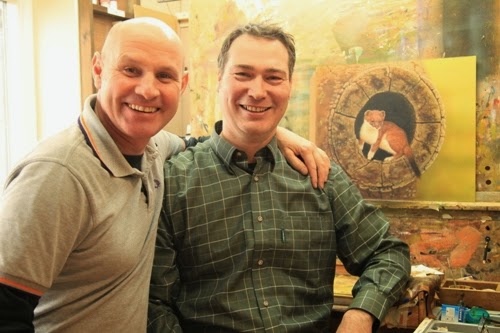 It was great too to share these charismatic little predators with so many people who are as enthusiastic as I am about them!
Posted by Unknown at 1:22 PM No comments: Links to this post

I've been watching an endearing colony of red squirrels in the Dales. 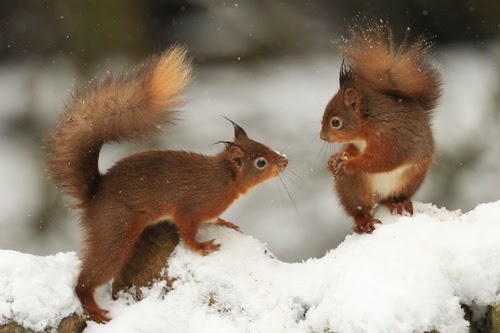 Wildlife photographer Simon Phillpott has been feeding these indigenous squirrels near Hawes for some years now and they have become so used to him that it is possible to get up really close. 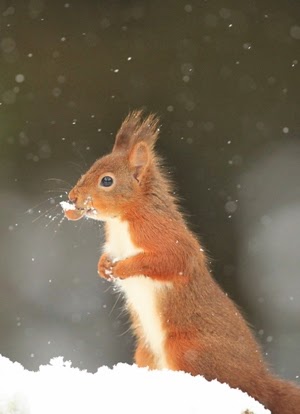 In fact they even follow him when he calls and, even more impressively, will go to a spot on the ground if he points to it. Simon, of Wild Dales Photography, was my guide for my three-day visit and he took me to watch them from his hide - although the squirrels were so friendly I didn't need to use it. 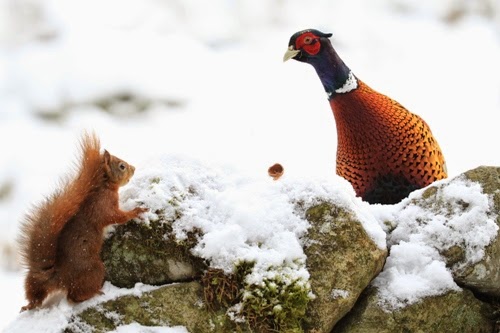 It was snowing when I got there and the branches and wall tops were white. It was great fun watching the different characters as they ran along dry stone walls, jumped fallen trees and perched on stumps. I captured this one as it took umbrage at a passing pheasant's attempt to take one of the nuts Simon had left for it! 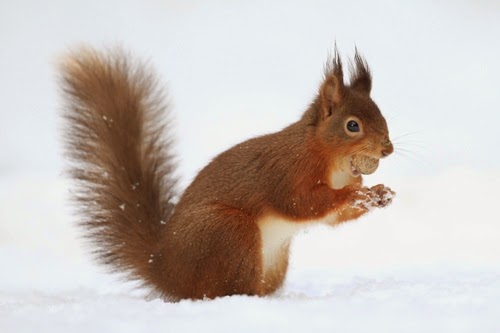 Simon puts out hazelnuts for them. Hazelnuts are their favourite food. It's amazing to see what short work a squirrel makes of their hard shells to get at the tasty kernel inside. The hazelnuts seem to fit their mouths perfectly. 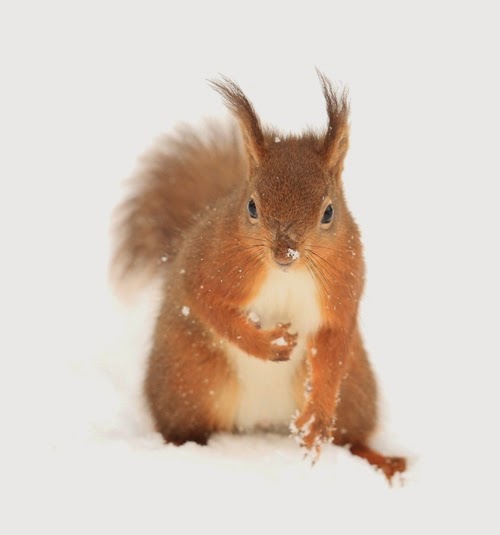 One character was particularly fun to watch. This squirrel had a slightly kinked tail and its winter coat and prominent ear tufts stood out. He was far bolder and more mischievous than the others, investigating everything he saw and even taking a look through our camera equipment. 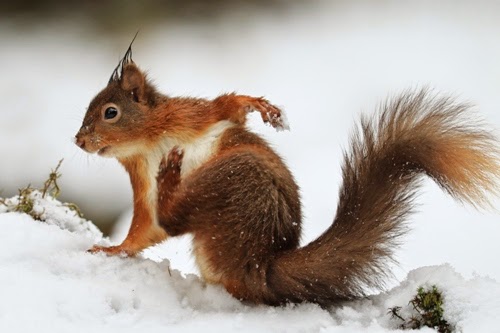 I'm pleased with the photographs I got. I painted the red squirrel below many years ago now and whilst it's been popular, I'd like to start a new one. 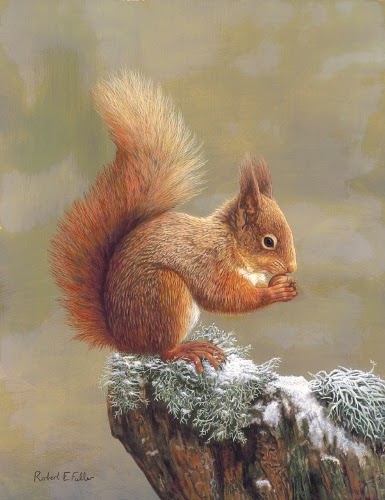 Posted by Unknown at 11:22 AM No comments: Links to this post