To mark Valentine’s Day, this year I’m exhibiting a painting of a giant tortoise from the Galapagos Islands named Super Diego. Super Diego is more than 100 years old and is said to be so virile that he alone is responsible for bringing his sub-species back from the brink of extinction. There were just 14 saddle back Espanola tortoises left in the world when Super Diego was introduced to a scientific breeding programme in the Galapagos in 1977. At the time, two males were struggling to breed with the 12 females that together made up the entire Espanola population.

But Super Diego had no such difficulties. As a last ditch effort to save the species, he was shipped to the Pacific archipelago from a zoo in San Diego, California, where he had been living since the 1930s. So potent is the genetic strain he contributed to the breeding programme, he is said to have sired an estimated 1,700 baby tortoises ever since. Now that is some work!  His portrait, shown below, is on display in my gallery in Thixendale this week. 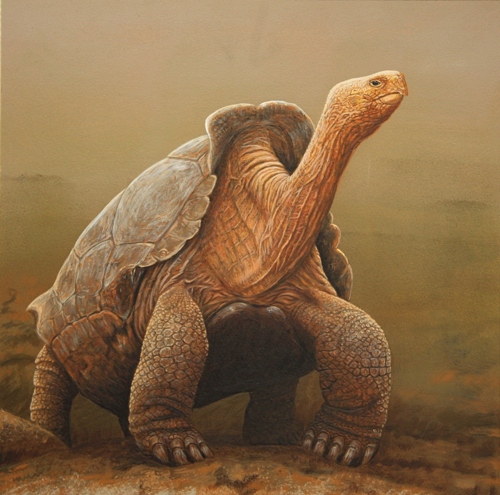 I painted it after watching Super Diego in 2014 slowly swagger about his accommodation at the Darwin Foundation Centre on Santa Cruz Island, where he continues to perform for his species to this day. It was fascinating to see him. The Espanola tortoise has a shell shaped like a saddle and beneath the sweeping pommel is a gap which allows this particular subspecies of giant tortoise to stretch its neck up to browse on low lying branches. Whilst I was watching Super Diego, a keeper walked into his enclosure and the tortoise raised himself to his full height in surprise. Standing high on his legs with his neck stretched up his reach was easily six feet. 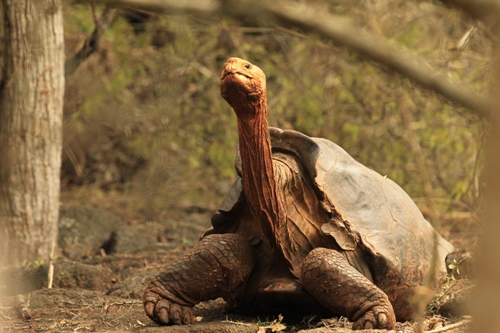 My trip to the Galapagos Islands, which lie 600 miles off the coast of Ecuador, involved observing some of the world’s most unique animals embark on their courtship rituals. I had timed the visit to coincide with the breeding season and the islands were teeming with birds in the throes of these remarkable displays. On my very first day I was blown away by the otherworldliness of the place. 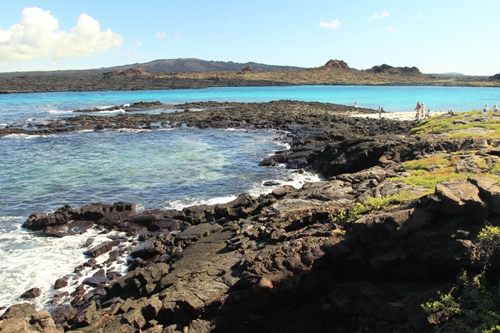 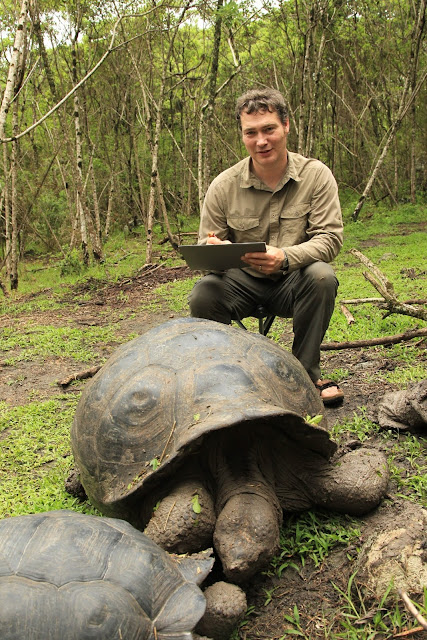 There were blue-footed boobies stepping across dark volcanic rock whilst in the trees magnificent frigate birds puffed out blood red throats like toads. These jet-black birds are normally just that; black with the tiniest red sack at their throats like pirates wearing thin crevettes. During the breeding season the males puff these out until they become enormous bright red balloons. This may not seem particularly romantic to you or I, but the females clearly find it so and it was touching to see them snuggle up in to these inflated chests and I painted this, as below. 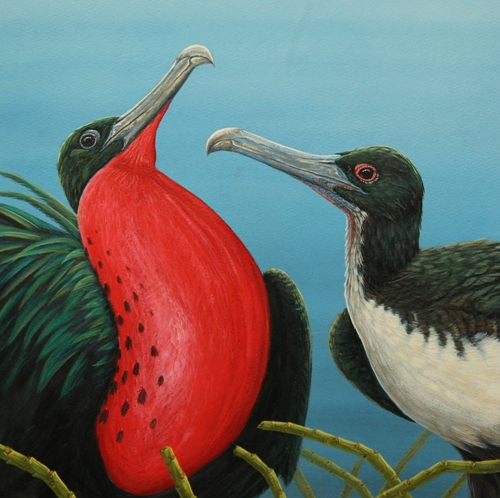 But among the most fascinating courtship displays I witnessed was that of waved albatrosses, which I saw during a day trip to the island of Espanola. Espanola is host to the only nesting colony of waved albatross in the world. We walked ashore just as dawn was breaking. Some marine iguanas were lined up on the beach trying to warm up in the early morning sunshine. Sally Lightfoot crabs - bright orange crustaceans thought to be named after a nimble Caribbean dancer - were tip-toeing across the sand. We left the shore and walked through dense bushes. Very soon I could hear a very strange, eerie sound. The noise turned out to be the sound emitted by a pair of courting albatross. It grew louder and louder, a haunting ‘whoo hoo’.

We rounded a corner into a clearing and suddenly there were several pairs of albatross performing this elaborate courting ritual right there in front of us. Waved albatross stand at nearly one metre high and have delicate waved markings that ripple across their breast. They are normally solitary birds and spend the entire year out at sea, coming to this specific island only once to breed. These birds mate for life so this annual reunion is very emotional. Pairs seem so genuinely pleased to see each other and greet one other by rubbing their bills together tenderly.

This gentle beak rub is followed by one or both birds standing suddenly bolt upright. These huge birds either stand with their beaks pointed towards the sky, emitting the strange wailing sound that I’d heard earlier, or pose alert with their beaks wide open, before continuing to rub bills again. Every so often the pair clack their beaks rapidly like a pair of castanets. Then, abruptly, they stop and begin preening over their shoulders, or moving their heads fluidly from side to side as though dancing. Sometimes, the couple will suddenly, and, seemingly, randomly, take a break to attend to their nests, before, without any apparent prompting, resuming their unusual courting ritual once more. This comes across as quite comical, after the intensity of the beak-clacking. 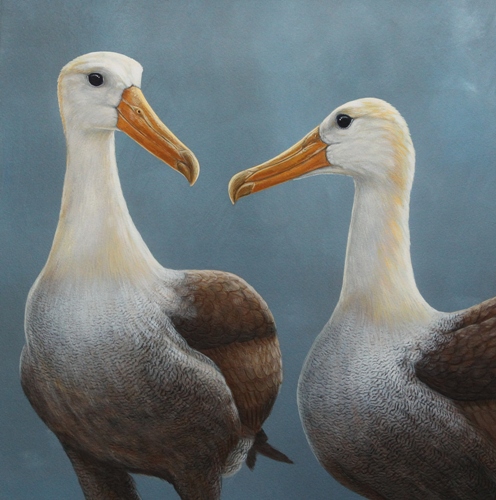 I was keen to record the moment when two albatross are reunited and on my return I painted the way in which these huge birds looked so graceful when they looked lovingly at one another, see above.
Albatross are quite cumbersome on land but up in the air they are majestic. I watched as a male with a 7.4ft wingspan circled overhead looking for somewhere to land. Finding a space big enough for that vast shape took some planning! Taking off was also incredible to watch. The wind was blowing onshore so the albatross would walk towards the cliff edge and then start running hard into the wind. They looked like men taking off in hang gliders.

Galapagos is host to so many utterly unique species that one trip is barely enough to take it all in and so I have booked a return visit this spring, again just as the breeding season kicks in. I’ll be there in a professional capacity as wildlife guide to a group of just 14 people. The visit has been organised in conjunction with Spanish-speaking guide Santiago Bejarano of Think Galapagos, in Bishop Burton, East Yorkshire, who has considerable knowledge of the region. 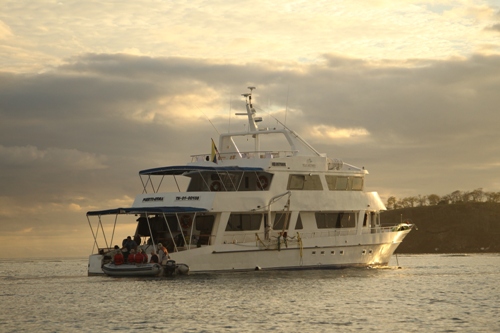 We will be touring the island on a luxury yacht and will get the opportunity to snorkel alongside sea lions, turtles, rays and even the indigenous Galapagos penguin. But, aside from a return visit to see Super Diego, the highlight of the trip will be seeing the beautiful birds that return to breed each year on these remote islands. I can’t wait to see them again and to show my guests the incredible wildlife that the Galapagos has to offer. 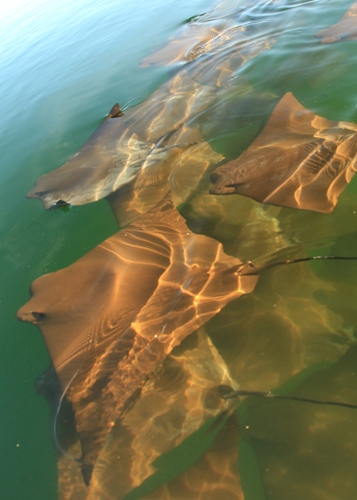 There are still places left on my guided trip to The Galapagos Islands this spring. The trip is limited to just 14 guests who will tour the archipelago on a specially-chartered luxury yacht. If you are interested in joining this exciting adventure or in any future trips please contact me on 01759 368355.
Posted by Unknown at 12:10 PM 1 comment: Links to this post