Catching up with old friends!

My trip to Ecuador and the Galapagos Islands was spectacular. But despite enjoying once-in-a-lifetime experiences such as swimming with sea lions and walking with giant tortoises it was so nice to be back!

As I drove home I couldn't help feeling a sense of excitement at the way the countryside looked so lush and green - and familiar. Despite having just endured a 24 hour trip home, I couldn't wait to find out what had happened to all the wildlife on my local patch whilst I had been away.

As soon as I walked into the house, I turned on the nest cam monitors in my kitchen and saw that the kestrel was now on five eggs – she only had one when I set off!

I swallowed down my supper as fast as I could and was just about to head out to see what the badgers and barn owls had been up to whilst I’d been away when the sparrowhawk came into the garden to feed. 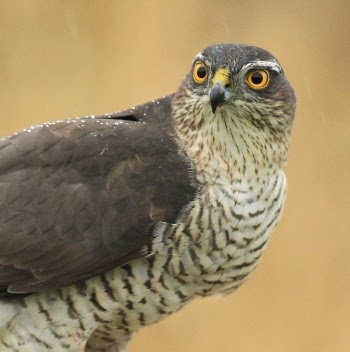 It was like an old friend had stopped by and I paused to watch her, wondering if she had laid any eggs yet.

Then I climbed into the car and headed out. On my way I saw a roe dear in a hedgerow. It sprang out into the open in front of me and then ran up the bank and looked back at me. I love watching roe deer, but I was keen to get to the badger sett before dark so I set off, forgetting to check to see if she was still pregnant! This is the time of year fawns are born. 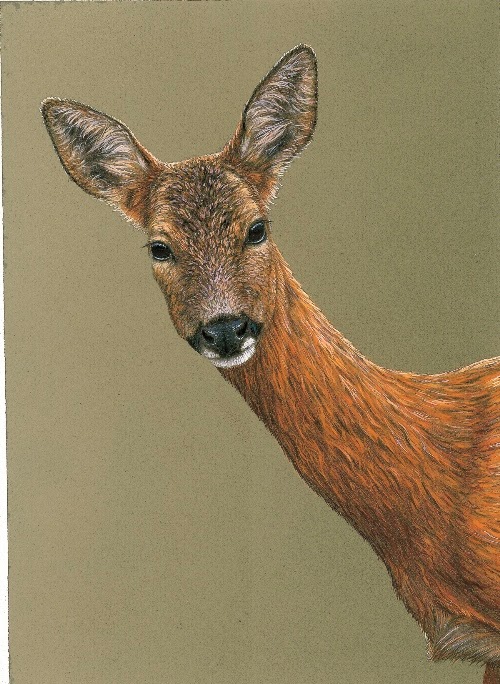 As I neared my hide I heard a green wood pecker yaffall and a curlew call overhead. Then the sharp alarm call of a red start caught my attention.

It was great to be able to recognise the sounds of each bird. Although I saw so much that was new and exciting in the Galapagos and Ecuador it was difficult to remember the names and markings of each new species, let alone their calls, and of course there’s nothing like the familiarity of the birdsong of home.

At the hide I checked on the barn owls first. I knew some of the six eggs laid by the female over Easter had hatched but it was difficult to make out how many from the pile of wriggling bodies underneath her wings. 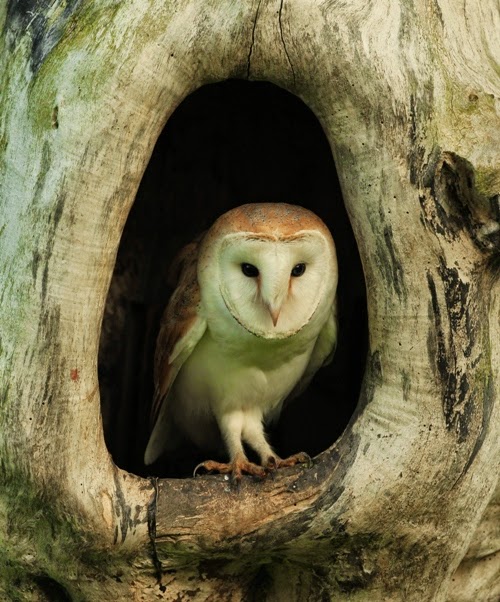 At about 8pm the male barn owl arrived with a vole and presented it to the female. Then he noticed I had put food out on a post nearby and swooped down and took four mice in quick succession. He picked up the fifth one and swallowed it whole then sat up in the tree and started to preen. 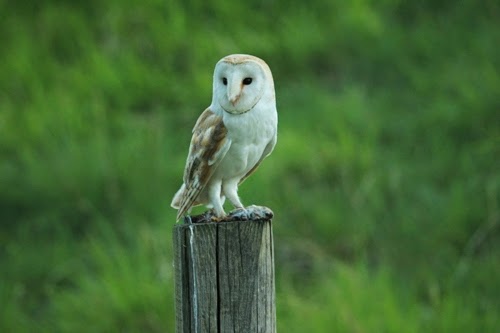 Then we both watched as the badgers started appearing below us, one by one. Nine adult badgers in total emerged that night, the most I have seen at this sett since 2009.

Sadly there are still no cubs - confirming my suspicions that the new boar I spotted last time may well have killed them – he was mating a different sow that night, so I will keep my fingers tightly crossed for cubs next year.

I didn't get back from my local wildlife tour until 10pm when I began to put food out on the garden
bird table for the tawny owls. I waited a few minutes and sure enough one swooped down to collect my offerings.

I counted as it collected, one by one, eight dead chicks from the table – a sure sign that it is feeding its own chicks somewhere. I will have to find out where the nest is this week! 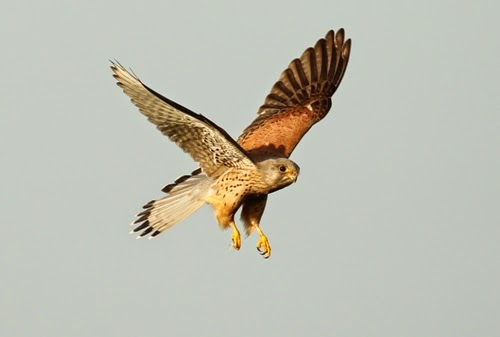 It was another half hour before I got to bed, but it was difficult to sleep knowing there is so much wildlife to watch and this was only my first night home.

I've yet to find out how the little owls, the peregrines, the foxes and buzzards have been up to whilst I've been away and where they are nesting or whether they have cubs.

But a few days later the kestrel eggs began to hatch. It was the perfect homecoming. I think they must have waited for me. Click the link below to see three of the chicks.


Posted by Unknown at 10:48 AM No comments: Links to this post

I saw so much that took my breath away during my tour of Ecuador and the Galapagos Islands it’s difficult to know where to start when it comes to relating my best wildlife sightings.

But since raptors are among my favourite birds I have decided to begin with the condors I saw in Ecuador. 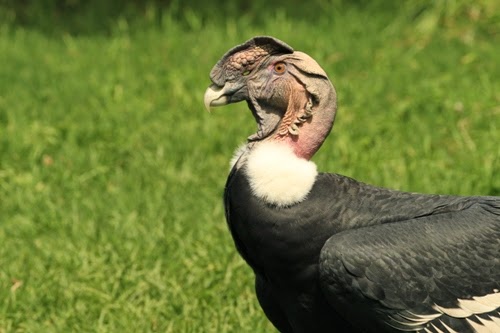 Condors are the largest flying land birds with a 10.5ft wingspan and the Andean condors I saw at the Zuleta Andean Condor Research Centre were very impressive.

This rehabilitation centre has some captive birds but also has a feeding station supporting wild birds. Although the condor is a national symbol for Ecuador, its future is seriously threatened due to habitat loss, trophy-hunting and secondary poisoning and there are only 60 condors left in the whole of Ecuador.

The Zuleta hacienda is dramatically situated in a deep forested valley high in the mountains and on the way there we saw a spectacled bear moving through the steep valley sides.

This Andean bear is named for the white markings on its short face which make it look as though it is wearing an outsized pair of spectacles.

I only spotted the bear because I was watching a condor through my binoculars as it swept down the valley and the condor flew straight past the bear – as if it was guiding me to it.

The bear was too far away to photograph but we stopped to watch it as it moved through the undergrowth before continuing on our way to the research centre.

As our car arrived at the feeding station, a female condor landed on a cliff, stopped for a while then flew off. Then a male chased her down the valley. 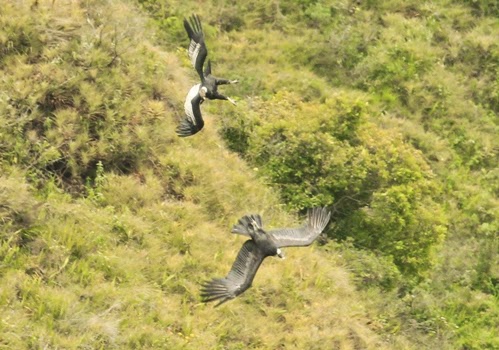 It was a fantastic welcome and I rushed to get my camera trained on the huge wings of these birds as they swept along the skyline.

I saw a total of five condors that day and watched them spellbound as they glided so gracefully against the skyline. 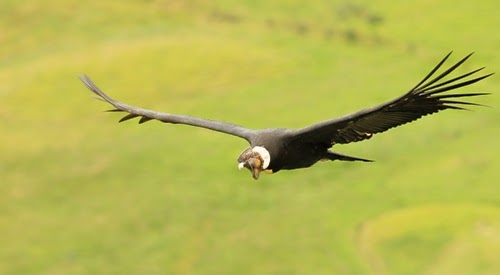 It was interesting to see how they lifted their huge bodies off the ground. A condor can weigh up to 25lbs.

As I watched I noticed one condor was using the updrafts at the ridge of the valley to gain lift off. I decided I would climb to the top of the ridge the following day on the off chance of a flyby.

I set off early but the pick-up that I had hired to take me there got stuck half way and I had to walk the rest of the way. It was only one kilometre but at an altitude of 10,000 feet and 30kgs of gear on my back it was hard work.

When I arrived at the viewing platform I felt confident it had been worth it. The view was spectacular.
But then, after one and a half hours of waiting, I saw a condor on the opposite side of the valley trying to lift on the updraft.

It was a young bird, about three years old, only just developing a white collar round its neck but yet to get the white band on its wings.

It wasn’t long before an older bird joined it, also trying to find lift. It occurred to me that I had climbed to the wrong side of the valley especially when a third condor appeared on the far side of the valley.
I tried to remain positive. This was my only chance to photograph them on this trip as I was due to leave that afternoon.

Then at 12pm my guide suddenly let out: “Condor! Condor!” and we watched as a pair flying in tandem swept down the valley towards us. 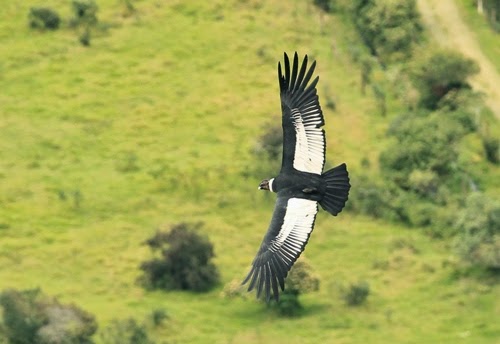 This time they came right to us and pitched and turned in front of us. It was spectacular. I would have waited three days for that moment. I felt privileged to get it in just three hours!

And it wasn’t over yet. Again and again the pair flew by, once at just 20m away. You could hear the wind as it rushed over its wings.

It is incredible how such huge birds can look so effortless in the air.

This was the dominant pair in the area and they seemed to be quite inquisitive about our presence. I saw them later on the opposite cliff top.

The stood close to one another, rubbing their heads together and preening in a touching courtship display.

Ecuador is big mountain country with big birds to match and I left feeling I had spent the day amongst giants.

Posted by Unknown at 2:09 PM No comments: Links to this post

I have just returned from a spectacular trip to the Galapagos Islands and Ecuador. What a fantastic and other-worldly experience. I've seen so much, from condors to marine iguanas and giant tortoises, at times I felt like I'd gone back in time and was walking amongst dinosaurs! 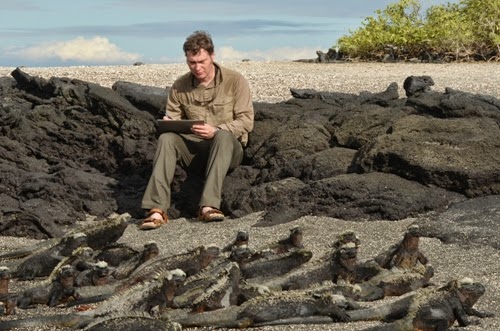 I'm sorting through the 1000s of photographs and sketches I made whilst I was there and will be posting them soon as well as tales of my incredible experiences - which include snorkelling with sea lions! 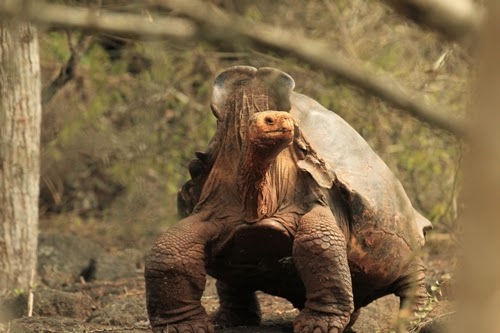 Posted by Unknown at 10:07 AM 2 comments: Links to this post

Two of the barn owl chicks have hatched! These tiny owlets are vital to the recovery of barn owls here on the Yorkshire Wolds and I am continuing to monitor their progress through the nest cams. Take a look at my latest footage here:


The owlets hatched on Tuesday and are already TV stars, featuring on BBC Look North and ITV Calendar today.
It was very exciting to see the first one appear. I felt like a new parent!
Posted by Unknown at 1:30 PM 1 comment: Links to this post