I've been watching this pair of wild stoats via a camera hidden in their nest and I've discovered some really interesting behaviour. Below is my latest footage. 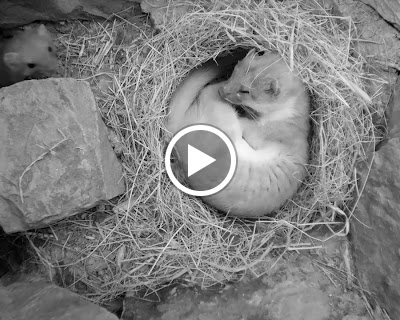 It shows a the male curled up asleep in the nest when the female enters and tries to engage with him. She is very cautious about waking him and slinks gently up alongside him, momentarily resting her head on his back. However he's not about to get up and barely moves a muscle, gazing at her through one eye until she retreats back outside again.

But what is really interesting is the sounds that they make. For such notoriously viscous creatures, they sound like gently chirruping guinea pigs or soft bird chatter!

Posted by Unknown at 2:05 PM No comments: Links to this post

It's lovely to see a little sunshine today, perhaps spring really is on its way.
What a strange, warm, wet, windy winter it’s been. The bats have stayed on the wing, hedgehogs have barely bothered to hibernate, butterflies, blossom and daffodils have all made unusual appearances: it’s been tempting to think ‘What Winter?’
This was despite MET Office predictions last October for the coldest and most severe winter on record. The hype about this bitter forecast reached fever pitch when a Bewick’s swan made it onto the national news when it arrived from Siberia two weeks earlier than usual.
At the time, I was in a meeting in Bristol to discuss ideas for wildlife topics for The One Show.
The BBC1 series producer wanted my input for a new series of wildlife related pieces and I suggested a snow safari to look for owls, and hares. The plan was to show how hares breed and box all year round. The producers jumped at the idea and commissioned a four and a half minute piece.
I came home and made initial preparations. In order to photograph wildlife up close it is important to blend into the background. I have had plenty of practice and have a few tricks up my sleeve: a snow white ski suit, a balaclava made out of a pillowcase, white oven gloves and tailored white covers  to wrap around my camera and tripod. 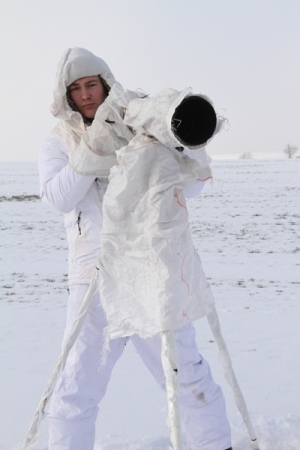 I had enough of this white camouflage for myself but I bought extra for the film crew and presenters.
All we needed now was snow. Many don’t like snow, but I love it. There is nothing that transforms the landscape so fast. Overnight you find yourself in a totally different environment and this can present so many opportunities for my photography and artwork.
We had a flurry  in November but it didn't last the day. This was followed by so many wet and windy storms I was getting worried the MET office, that was using the alphabet to give each storm a sequential name, would run out of letters.
Then finally in January the snow came. Not a lot, but enough for me to get some video footage of the hares before inviting the rest of the crew for the main shoot.
I drove to some fields where I often see hares. And sure enough, I spotted a few in the distance straight away. They looked like specks of brown on a pure white background. But I wanted to find a larger group so that I could film the interactions between them. 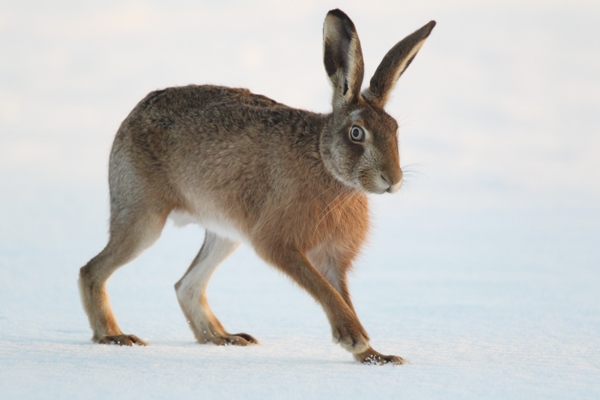 I scanned the landscape with my binoculars and soon spotted a group of eight on a distant field. I continued my search and picked out a further 30 hares, some of them actually boxing.
This field was clearly the place to go for. I rang the landowner to get permission to film and then set off. Dressed in a white ski suit I headed up a tram line, made by a tractor wheel, which took me directly towards the hares.
It was slow going. I wanted to get close enough to the hares to film them so I gradually walked closer, stopping whenever they showed signs of having spotted me.  It was like a game of grandmother’s footsteps.
After a couple of hours I was in photographing range of eight hares, frolicking in the snow. The group seemed to have got used to my presence.
I didn’t manage to film any actual full-on boxing but I had shots of some chasing one another about and even a few spats. Then I heard a dog yapping. Suddenly more hares came over the brow of the hill in front of me. The hares that I had been watching flattened their ears and squatted to the ground. Some of them dashed off. There were hares running in all directions. Then a lurcher ran across the field in hot pursuit of a hare, followed by a yappy mongrel .
The dogs disappeared. But now there was not a hare in sight.
They weren’t  poachers’ running dogs. The yappy crossbreed wouldn’t be fast enough to catch a hare. After a while some of the buck hares came back into the field looking for the does. But they were very jumpy and soon dashed off again. 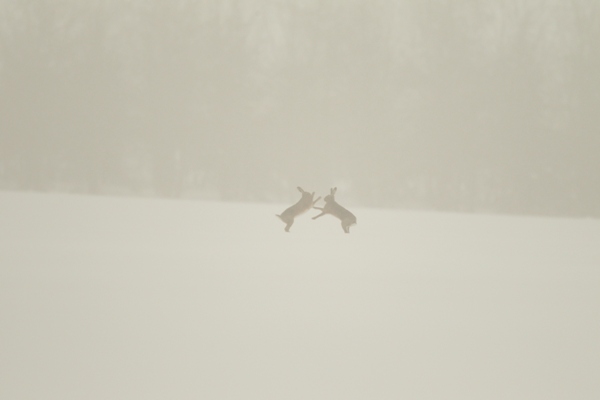 Feeling disgruntled, I headed off to a different field on the other side of the valley. There, I spotted two more groups. One of eight and one of 10, with a few stragglers around the edges of each. I headed to the smallest and nearest group.
I started making my approach slowly and then out of nowhere a bank of fog rolled in and enveloped me. I couldn’t see a thing. It was like being in a giant white margarine tub.
I heard the faint call of a grey partridge. The sound got gradually louder and louder and then a ghostly partridge appeared out of the mist, running and calling. I watched as its silhouette disappeared and faded into the fog, along with its call.
Alone again I tried to navigate by looking at my footsteps behind me. As long as these were in a straight line, I judged that I was still going towards the group of hares. 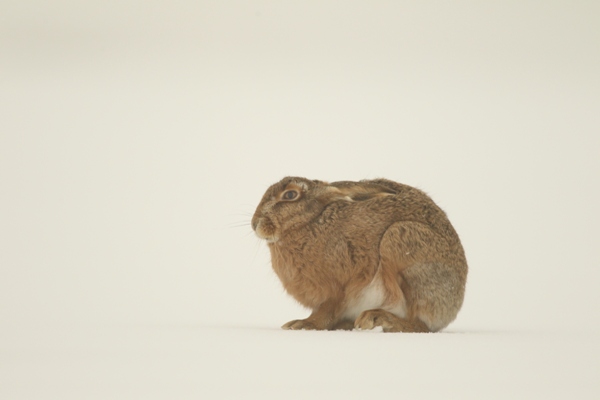 Then a hare burst out of a snow hole and dashed away from me. Finally my eye had something to focus on. The stray hare ran straight into the group of hares. They looked like ghosts in the distance, all standing to attention, ears, eyes and noses alert to danger. I waited for them to settle before slowly edging forward. Then suddenly, explosively they all ran at once away into the fog.
I decided to try my luck with the group that had been further down the field. Again, as I made my way blindly across the field, I bumped in to a straggler. He ran down the field and disappeared into the whiteness. I then spotted the larger group of hares. I had to tread really carefully. There were even more eyes and ears to spot me this time.
I took eight steps forward. Then stopped for a few minutes. Then I took  another eight. As I got closer I reduced it to six steps. Then four steps. I was watching the hares all the time. Any twitch of an ear or tilt of a head and I would stop for as long as it took to settle back down.
Then I saw a buck try his luck with a female. He sniffed at her but she looked less than interested and hunkered further down into the snow. Another buck chased this rival off in a circle around the group. There were two females amongst them - I could tell they were female by the obvious attention they got from the bucks and by the fact that they were slightly smaller with finer heads and paler fur than the more ginger bucks. Their body posture also gave them away. They tended to stay huddled down in the snow, defensively.
At last the fog began to clear. I watched the group for an hour. It was fascinating seeing the bucks jostling for position in the group and amusing to see how all their antics did little to impress the females who continued to hunker down into the snow.
I edged forward. Then without warning one of the females took flight, taking the bucks with her on a race across the field. She would only choose the fittest and strongest male to mate.
Then I saw her start to box. Snow and fur went flying as the pair fought it out, both standing bolt upright on their hind legs. Frustratingly they were too far away to film.
The race continued on to the next field and out of sight. I had only just one female hare left in front of me now. I got down low into the snow and on my hands and knees crept closer and closer until I was within 12 metres of her. She stayed in the same huddled position the whole time, like a compacted sculpture.
Then she got up and casually started eating her own droppings. Surprisingly, these retain some of their nutritional value. This wasn't the dramatic film of boxing hares that I had envisaged. But it was interesting behaviour nonetheless. 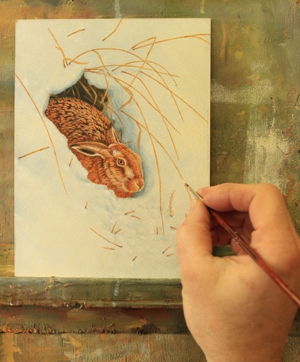 Posted by Unknown at 1:13 PM No comments: Links to this post