Swallows in my porch 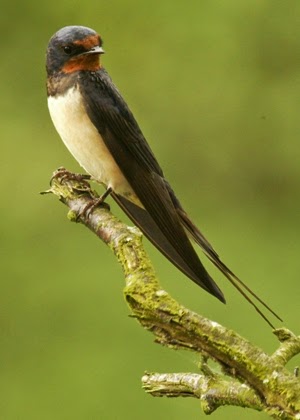 Each Spring I look forward to the arrival of the swallows to my garden. They usually nest in the front porch of my house. 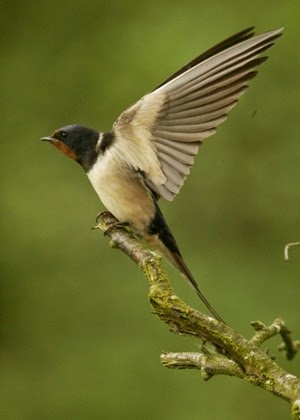 This year they arrived on cue and started to build, but for some reason lost interest in nest building and decided to go elsewhere. 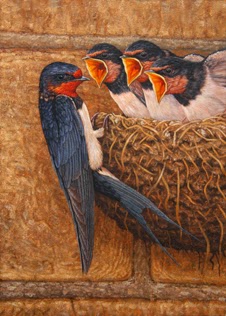 But fortunes changed in the first week of August when 2 pairs of swallows took up residence. One pair in the front porch and another in a passageway around the back of the house.

The chicks are half grown now, but I'm still having to keep my distance from the nests. I'm hoping to get photographs of them in the next two weeks just before they fledge.

The young chicks usually hang about on the gutters of the roof close to the nest or on fence lines. Here, they continue to be fed by the parents. 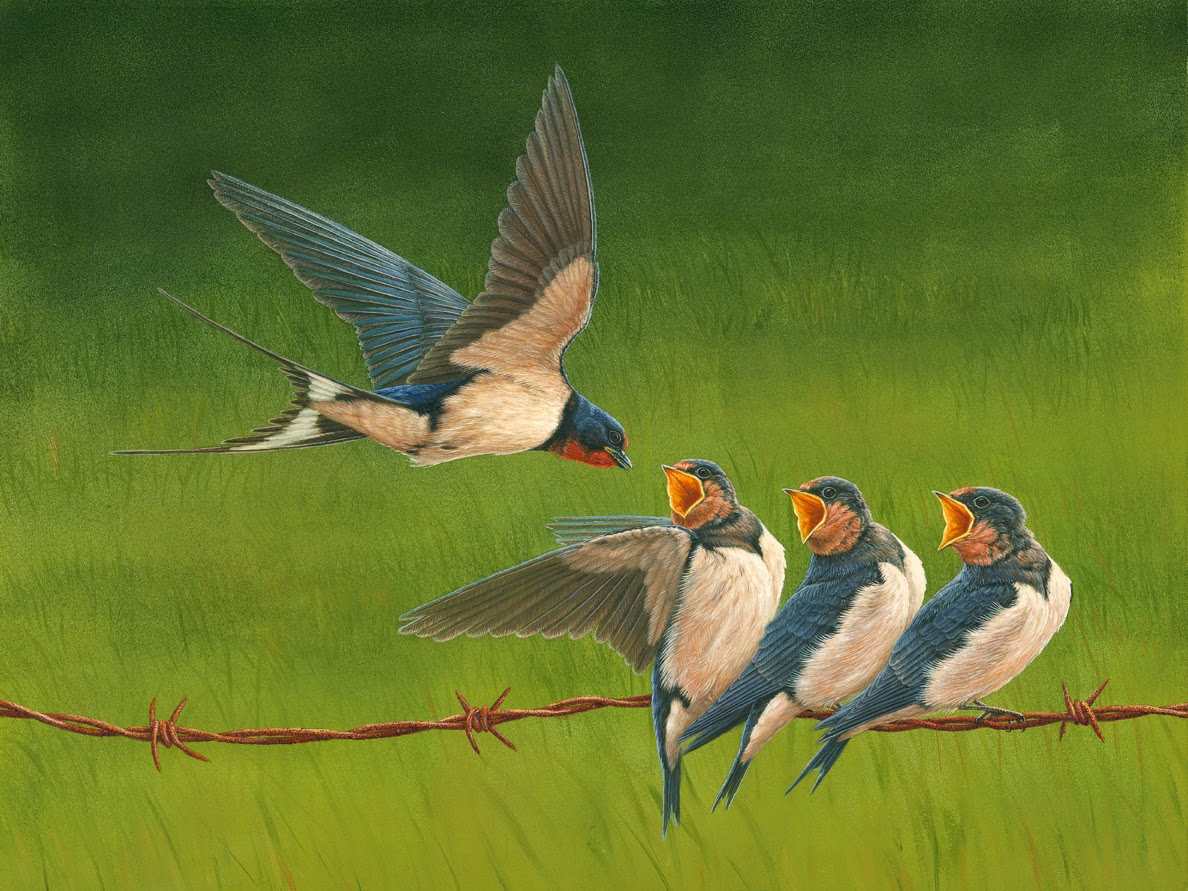 I have already seen swallows starting to gather together along telegraph wires. So fingers crossed the weather will hold out long enough for these two late broods to make it back to Africa.
Posted by Unknown at 5:01 PM No comments:

This weekend I travelled down to the Bird Fair at Rutland Water to meet the BBC Wildlife editorial team. I have been producing local patch reports of the wildlife around my gallery for them since the beginning of the year and it was great to put a face to a name.

The fair was very busy and packed with interesting stands, which has given me lots of new ideas of where to travel to next. I was particularly taken with a trip to see polar bears on snow mobiles in Svalbard so I'll be getting itineraries and prices together for this so I will be able to take a group there in 2017. (Let me know if you want to join me!)

While I was there I bumped into Miranda Krestovnikoff, president of the RSPB and her husband Nick and children and chatted to Bill Oddie too! And I got lots of information on different hides and lens covers for my cameras.

When I got back to my home in Yorkshire late on Sunday afternoon the kestrels were waiting for me. So I put some food out for them on a post and watched them eating their food while I ate my own at the kitchen table!

I had put out a whole dead rabbit for the stoats before I left for the weekend which they had devoured in two days. The young stoats are starting to get territorial now and chasing each other. It wasn't long before one appeared to feed.


Next, the sparrowhawk swooped into the garden and chased the garden birds. It has taken to running under the bushes to flush out the flocks of tree sparrows that congregate underneath the bird feeders.  A young sparrow took flight and the sparrowhawk followed it. It arched round in a circle to try to get to a dense holly bush, but the sparrowhawk was too quick and while flying upside down grabbed it before it could reach cover. I dashed for my camera to photograph and video it out of the bedroom window. It gobbled it down as if it was just a snack.

Tree sparrows are in decline nationally and I have quite a stronghold of them around my gallery - about 30 pairs. So I have got a dead pigeon out of my freezer and will try and start feeding it to this sparrowhawk to distract it from my precious flock!


Later that evening, I went down to the local badger sett that I visit each night to put down some dog biscuits. I have a barn owl nest box there too and the adult pair has raised 5 chicks already this season and are now sitting on their second brood of eggs. I put out food for them too. A barn owl screeched angrily at me as I arrived, clearly annoyed that I hadn't feed them the previous day as I was down at the Bird Fair. It flew over my head nearly mobbing me. As I ducked I saw that it was one of the fledged chicks. I didn't see the adult female I suspect she was keeping her warm and sheltering from the strong arctic winds.There is definitely an autumn feel in the air now. 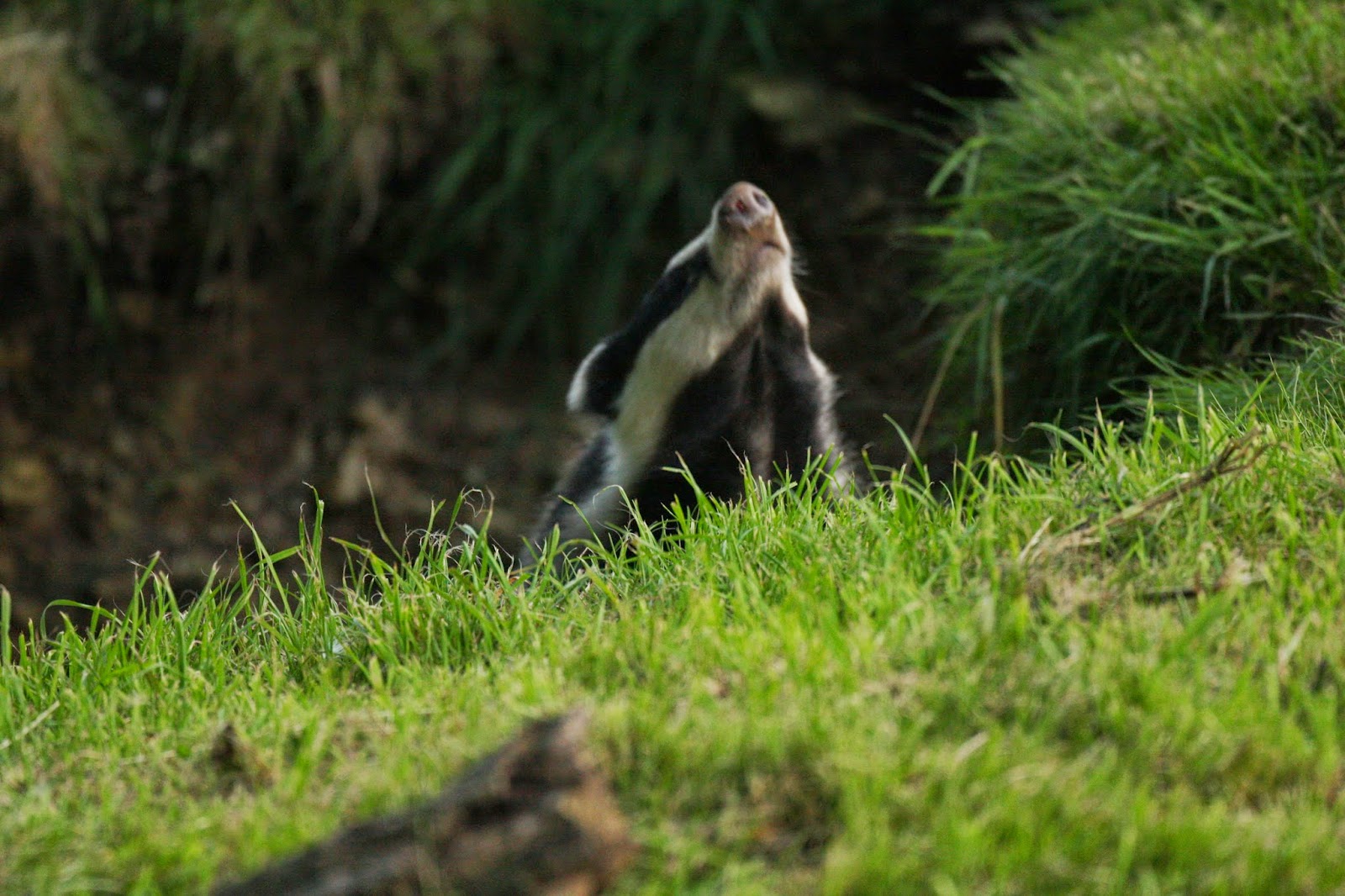 As I crouched near one of the badger holes a badger popped out to see what the fuss was about. I threw it a handful of dog biscuits and then I backed off and climbed back over the fence.

I saw two more young barn owls quartering the valley, practising hunting, hovering and then stalling in the wind if they thought they heard a movement. I made a vole-like squeak and they both made a bee-line in my direction. They circled overhead confused at this 6 foot 2 inch 'vole' making the noise.

As I approached my car a roe buck sprang from the hedge barking its alarm call before pronking away. 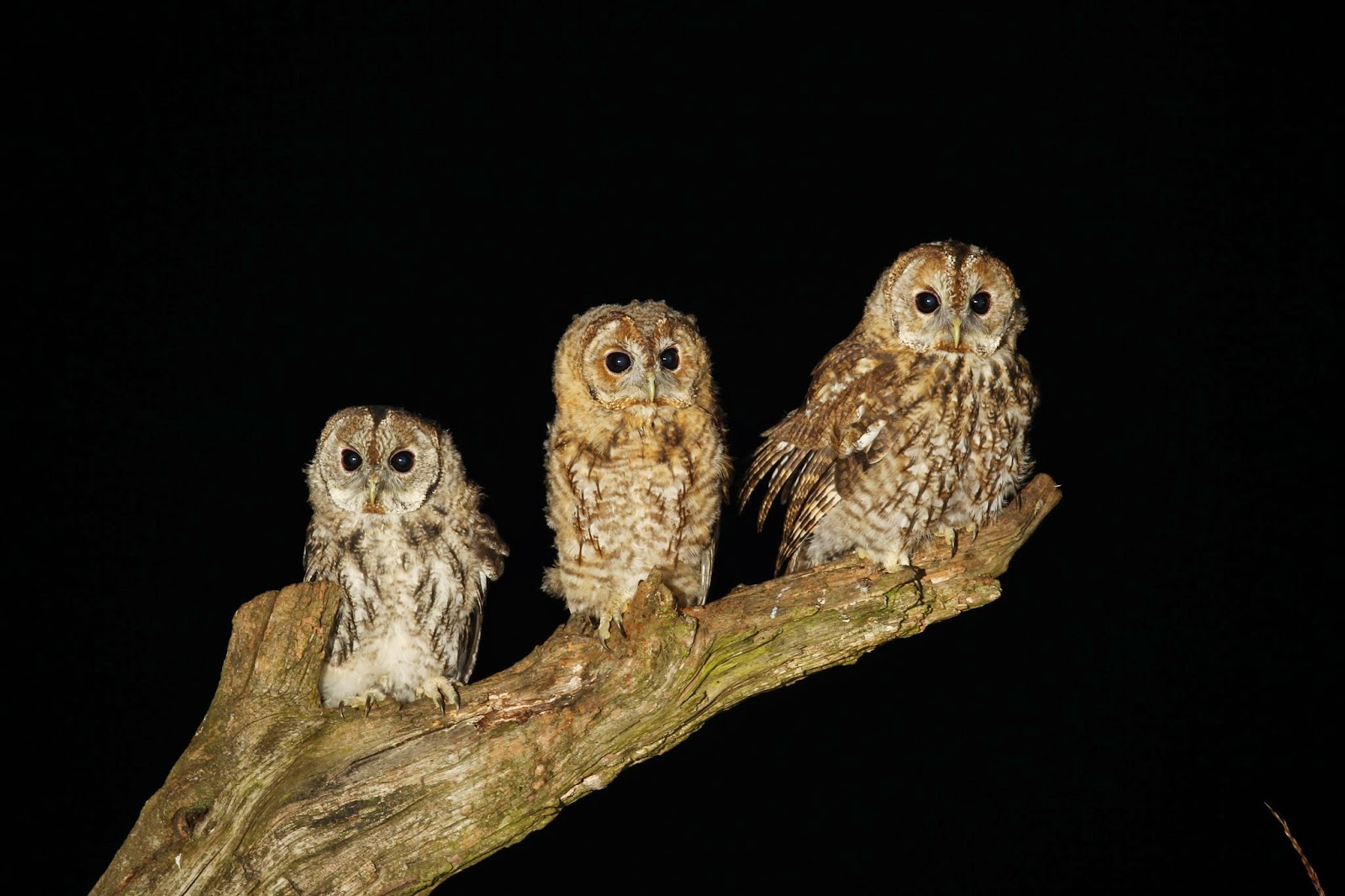 As I arrived home 3 tawny owls were feeding just 6 metres from my living room window. They are coming earlier and earlier each night as it is getting darker sooner. Last night they were here at 8.50pm.

It is fascinating planning exotic trips abroad, but there's nothing quite like your local wildlife that I know so well and has become so accustomed to my presence and I was delighted to have seen so much in such a short space of time. 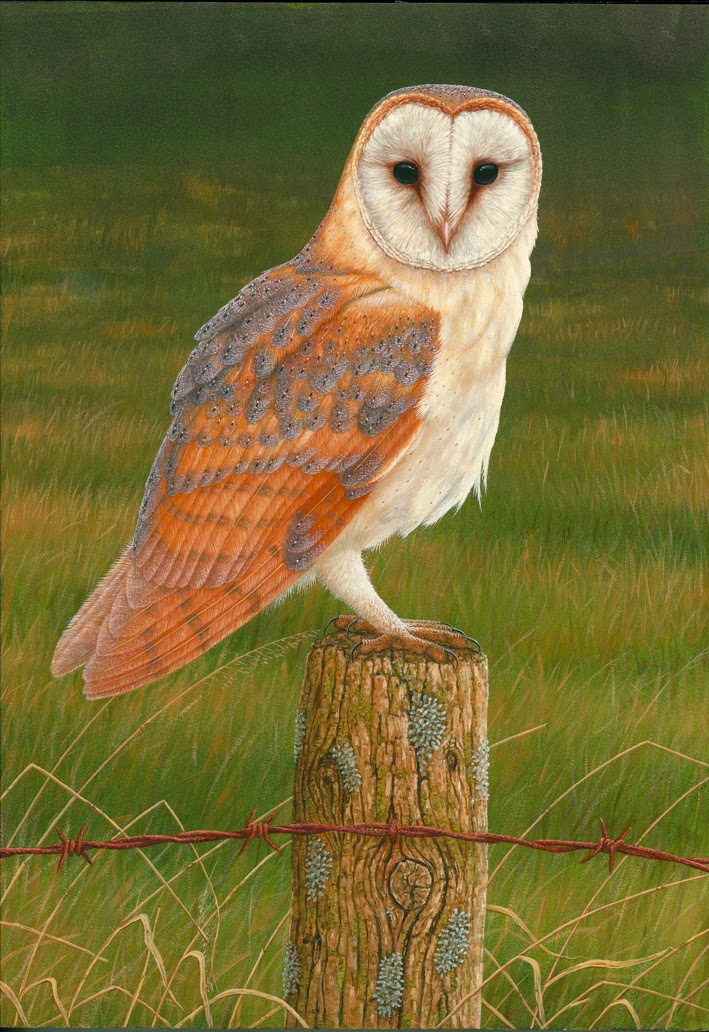 Posted by Unknown at 2:43 PM No comments:

I've been watching the tawny owl chicks mature over the season. They are reaching maturing now and virtually indistinguishable from the adults.
﻿﻿
The feathers on the backs of their heads are the last to come through so I can still just tell who is who.

﻿The other thing that does make them look different is how unkempt the adults are looking. They are devoted parents and really do a great job of bringing up the brood. And it has been hard work for them as this year they have had 10 chicks to care for. Look how they now.


But in spite of all this devotion the attitude of the adults has started to change. We’re entering a transition period when they are no longer caring and nurturing the chicks, they are starting to push them out of their territory and into pastures new.

Every night I can hear the pleading calls of the chicks to the parents but the call from the adults is aggressive and frightening in response.

It's a rite of passage that seems to visible upset and confuse the chicks, who really don't seem to know what to do. It's certainly a steep learning curve for them as they start off on their own. Talk about tough love. 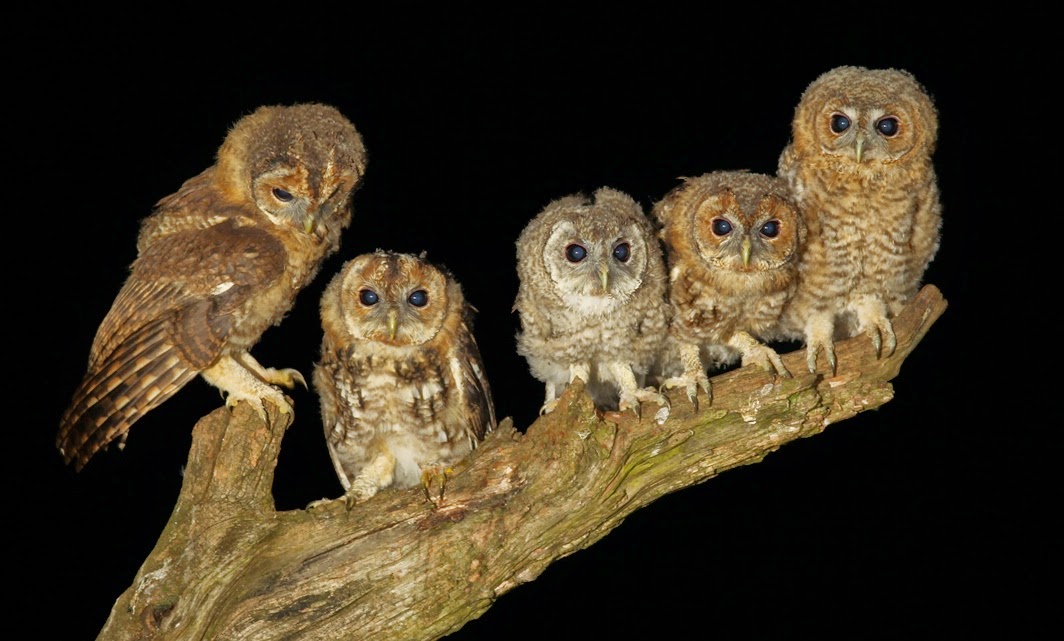 So I'm expecting to see the young for a couple more weeks, but then I expect them to gradually disperse, leaving just the two adults here for Autumn and Winter until the breeding season starts again next year. I’ll be missing their nightly antics!

And while the breeding season is drawing to a close for the tawny owls a new one is dawning for the barn owls who are going for a second brood this year.

The 5 young born in May have now fledged and the adults have wasted no time in getting started with a second clutch of eggs.

I'm expecting these to be born in early September with the chicks being ready to fledge in November - let's hope for an Indian Summer and a mild winter!
Posted by Unknown at 11:11 AM 2 comments:

I've been watching a family of stoats in my garden and I've managed to get some great photographs which I plan to use as studies for a painting. 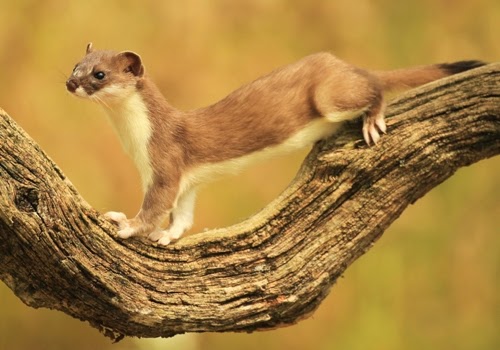 I first spotted the stoats playing in the garden and when I saw one climb the wire mesh fence at the end of our boundary with incredible ease it gave me an idea. 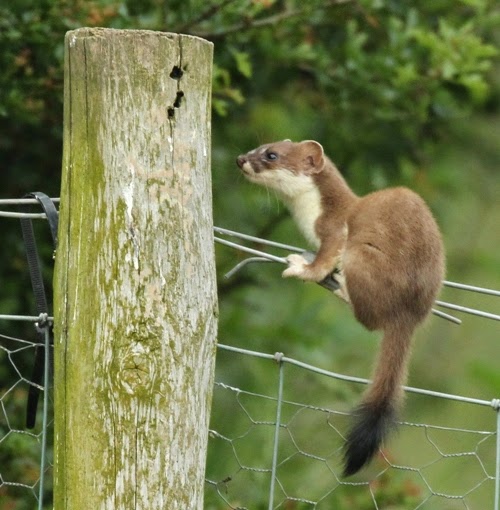 I decided that if I could get the stoats to feed in the garden I could set up an assault course for them and watch them as they chased one another about. Stoats are very nimble and agile and I wanted to capture this skill. 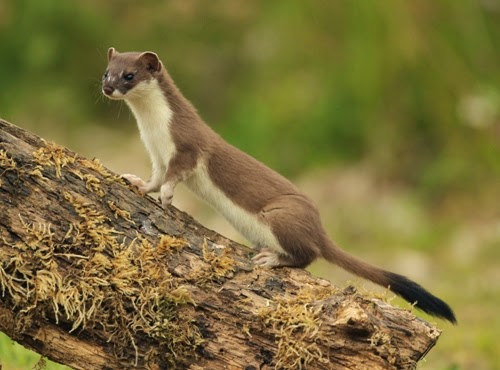 I began putting out rabbits for them every day and once they were visiting the garden regularly, I set a trail of food along some old branches. 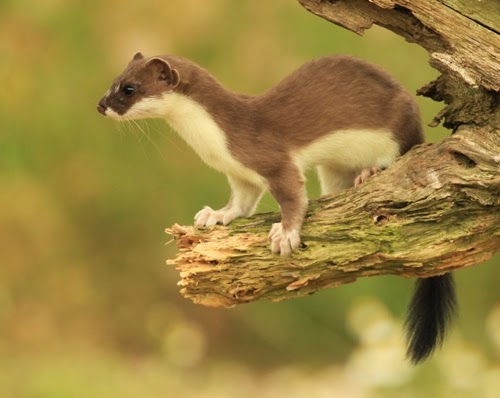 At the top of the assault course I put a down a hollow log and left a rabbit inside it everyday. 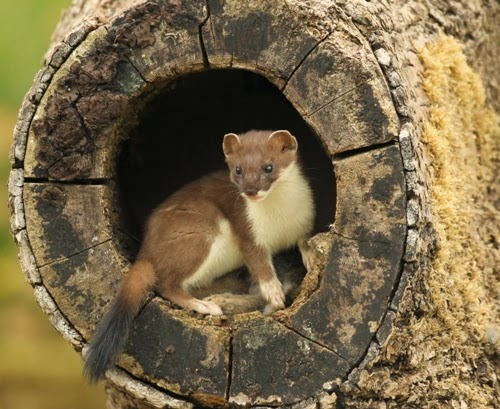 It was fun to watch the stoats work for their food! 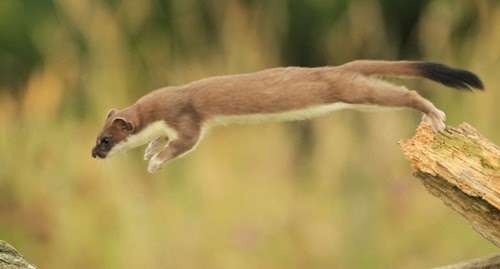 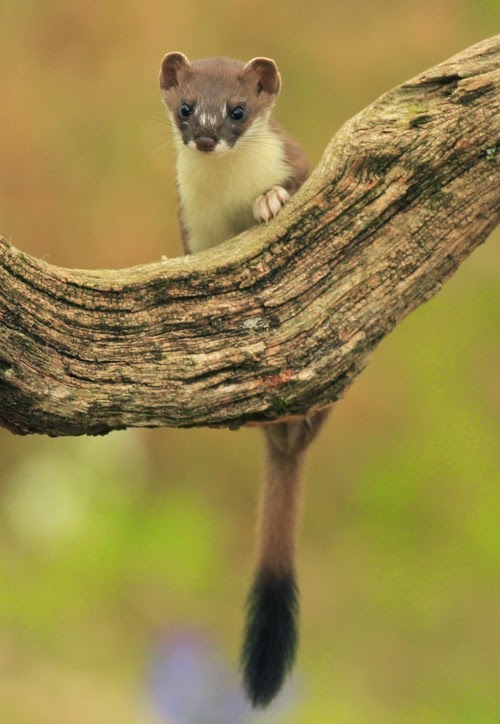 I kept changing and developing the assault course, to capture the stoats in different poses. 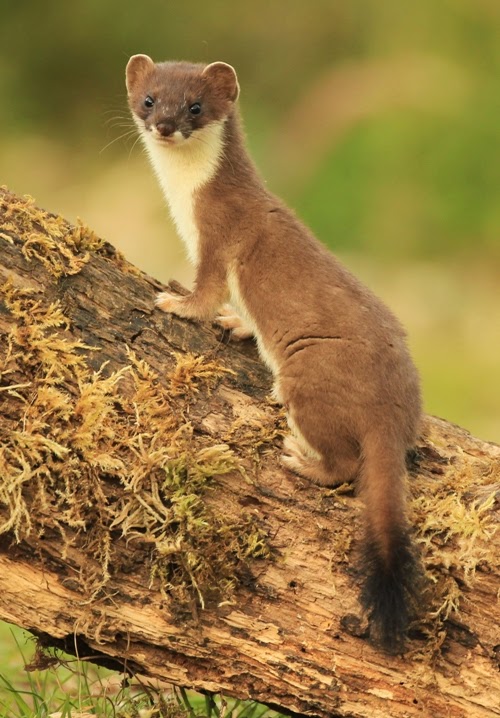 I love watching them. They are real characters. 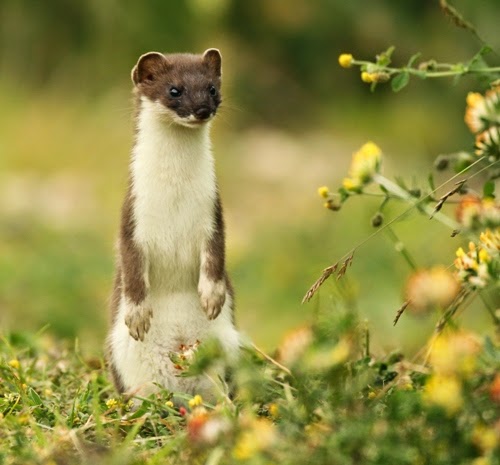 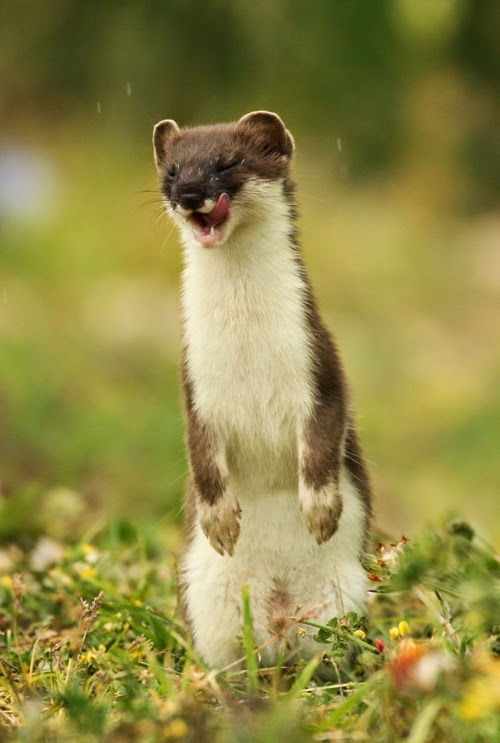 They are also very cheeky. It didn't take them long to work out that I was also putting food out for a family of kestrels and this one ventured up the branch to try to pinch it. 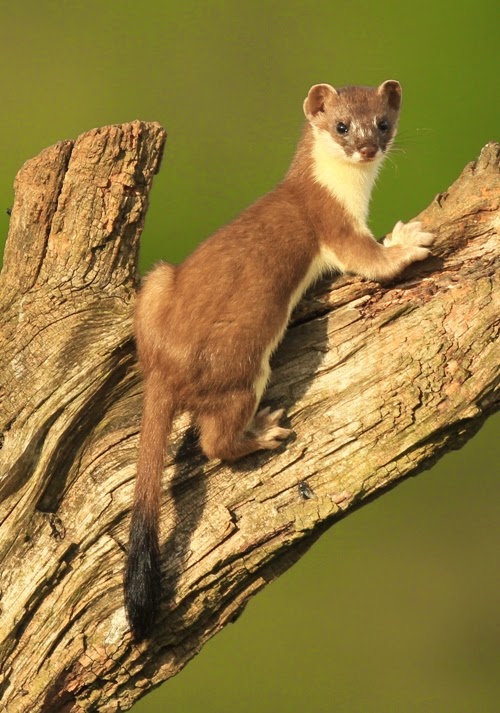 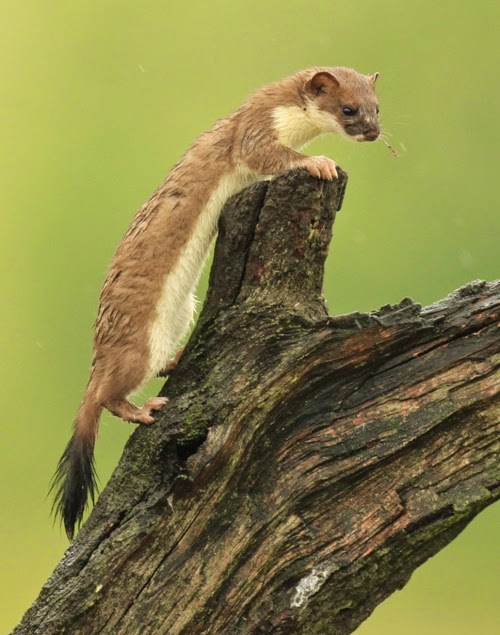 It got sharp shrift from the adult female kestrel. She swooped down and plucked the stoat off with her talons and flung him onto the ground!
Posted by Unknown at 11:08 AM No comments: