My summer exhibition is now over. The barn owls worked their magic and people flocked to see them. 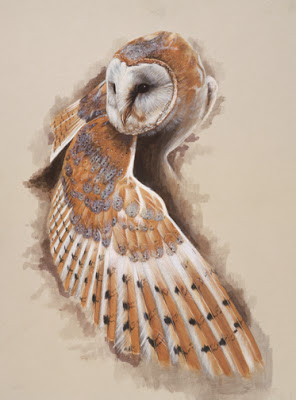 Now it's time for them to take a bow and say good bye as they get packed up ready for delivery to their new owners. 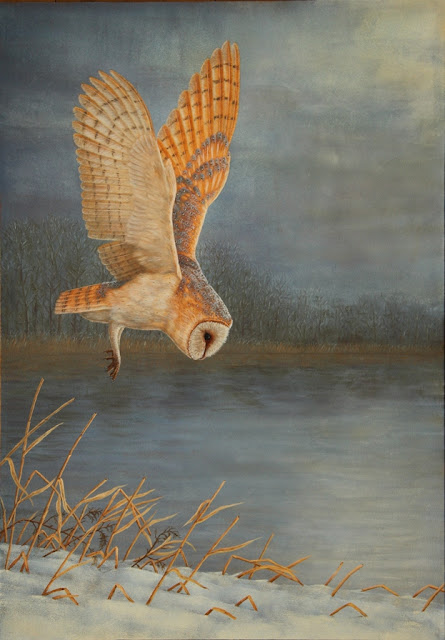 I shall miss them.
Posted by Unknown at 1:48 PM 2 comments: Links to this post

My summer exhibition is in full swing and people seem to be really enjoying the new paintings of barn owls.

Tomorrow night I will be giving a talk about the barn owls living here on the Yorkshire Wolds and my campaign to protect them here.I'll also be offering tips on how to spot them and the other owl species that inhabit the area. You need different tricks up your sleeve to spot each species. 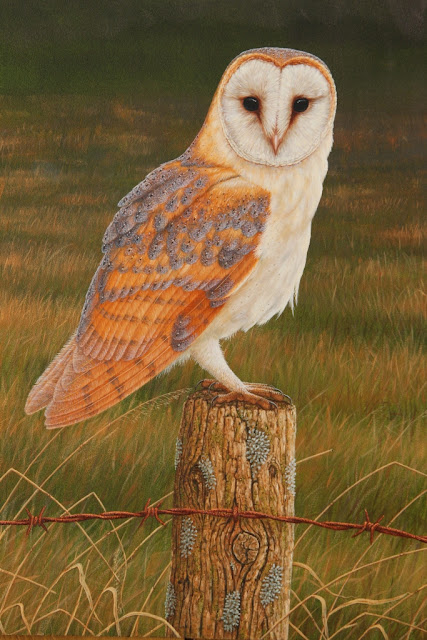 Roadside verges and country lanes have become a haven for voles so watching barn owls can readily be done from the comfort of your car.Barn owls are one of the easiest owls to see as they hunt on the wing out in the open at dusk. They quarter rough grassland on the look out for small rodents – especially short-tailed field voles.
Barn owls nest in farm buildings, hollow trees and specially-designed owl nest boxes. But beware of getting too close and disturbing breeding barn owls as they are legally protected as a ‘Schedule I bird’ requiring a license to disturb them near their nest site. 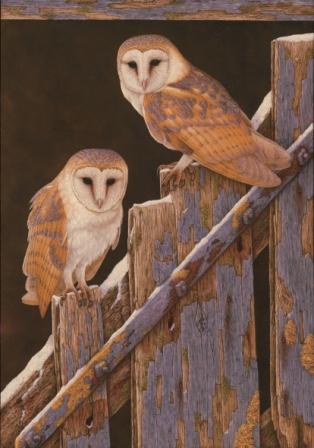 A good tip if you want to spot them is to wait for a few days of poor weather and head out as soon as it clears up. The barn owls are desperate to be out hunting. The female especially needs to build herself up ready for egg laying and so you are very likely to see them in daylight at this time.

Little owls can readily been seen during the day too, but they are most active at dusk. They nest in small holes in trees or farm buildings and frequent areas of rough grassland with scattered trees. 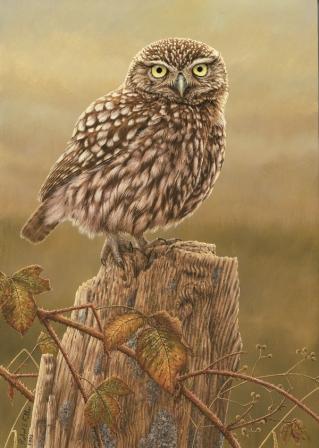 They have small territories at this time of year and don’t stray too far from their nesting site.


They always perch low down in trees so that they can look out for a tasty beetle or worm, so set your sights on the bottom half of a tree rather than the top.
Their dumpy silhouette is unmistakable. They also like to sit tight up against a tree trunk with a good view of the ground yet their dappled feathers can make them surprisingly camouflaged against the bark.
White droppings streaked down the trunk are a dead giveaway of one of their favourite perches and look on the floor below, too, for small pellets. These are often ‘jewel’ encrusted with beetle wing cases.
Tawny owls are the most common and widespread owl, but they are also the most nocturnal and mainly live in woodland. They don’t venture out until it is almost dark when they can be seen on fence posts and telegraph poles. 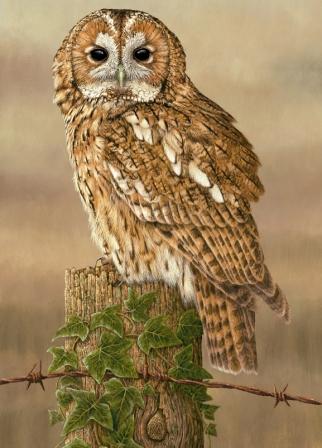 Their hunting technique is simply to wait patiently for prey to pass by underneath before they swoop onto it, so you rarely see them out flying.
Their favourite food is wood mice but they will eat anything they can catch from worms to young rabbits and at this time of year will readily take young blackbirds.
It is for this reason that their daytime roosts are given away by a cacophony of bird alarm calls, as parents try to protect their young.
If you hear alarm calls consistently in the same place, try walking slowly towards the sound – it is almost always a predator and quite often a tawny owl or their young.
The adult birds often sit in the same place in the boughs of a tree throughout the day and only take cover in a hole if the weather takes a turn for the worse.
Posted by Unknown at 12:22 PM No comments: Links to this post

Email ThisBlogThis!Share to TwitterShare to FacebookShare to Pinterest
Labels: how to spot owls; wildlife artist shares tips on how to find owls; exhibition of paintings of owls;
Newer Posts Older Posts Home
Subscribe to: Posts (Atom)