A bird table with a difference 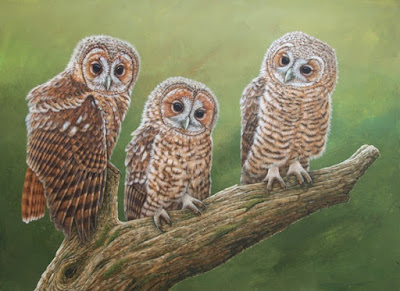 I have just finished this painting of the three tawny owl chicks that visit my garden bird table with their parents every night.

Click on the video to watch a video of how I painted it from the very first brushstrokes to the finished painting.

Tawny owls have been bringing their young to feed at my garden bird table for some 10 years now and I regularly pull up a chair in the evenings to enjoy the show as they all swoop down in front of my living room window. I've had up to 10 at once balancing on a branch outside the window in the past and it really is a spectacular sight. 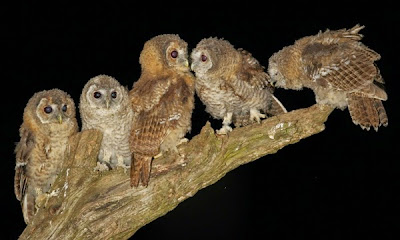 My bird table is unusual in that it caters for birds of prey, in particular kestrels and tawny owls, alongside the seed-eating birds you are more likely to see in most people’s gardens.

This summer I invited a camera crew from TV's The One Show to see how friendly tree sparrows like this make way for heavyweight falcons like kestrels and barn owls at mealtimes.


Kestrels and owls mainly eat rodents, but they will take a garden bird, especially a young one, if the opportunity arises. Thankfully the ones that visit my garden know that I have left food for them and so they don’t bother.

These predatory dinner guests make for an edgy atmosphere around the garden table. But it works and I get to enjoy spectacular sightings of a great variety of birds for my paintings.Watch this robin below. It is literally a few feet away from the kestrel.

This unorthodox dining event began one bitterly cold winter when I spotted a young male kestrel hunting from my kitchen window. He wasn't having much luck and I soon got worried about his chances of surviving the cold. 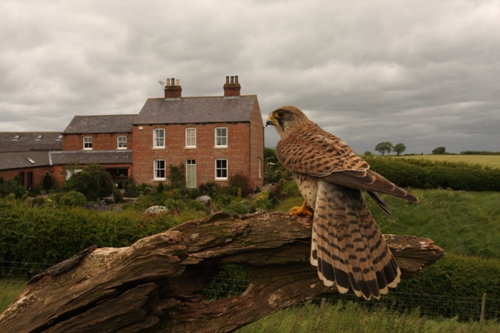 I decided to do what I could to help so I caught a mouse in a trap and put it out on my bird table. By the end of the day the mouse had gone. So the next day I popped another mouse out on the table. Again it disappeared. The kestrel soon became a regular visitor, sometimes arriving up to four times a day and it wasn’t long before I couldn’t catch enough mice for him.


I discovered it was possible to buy dead day old chicks, cockerels that are a by-product of the hen laying industry, so I decided to order some in. I also found myself picking up road-kill rabbit and pheasant to give to the kestrel. In this way I helped this kestrel survive the winter. The following spring he brought a girlfriend along to share this regular food supply and I was absolutely delighted when they nested nearby.

The kestrel became so tame that I could whistle as I put the food out for him and he would have taken it before I got back to the house. I took to tying the food onto a branch so that he stayed for long enough for me to get my camera out!


Before long I was ordering chicks by the 1000s to feed the kestrel’s expanding family, as well as a pair of tawny owls that had cottoned on to the evening service I was providing. During the late summer months the tawny owls began to bring their chicks to the table. 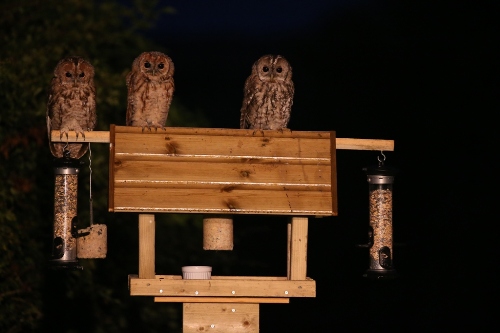 Although this brought fantastic photographic opportunities, it also became a logistical challenge.

Not only did I need to ensure I had enough ingredients to keep up with their ever-expanding menus, I also needed to timetable the arrival times of my avian guests to avoid any serious consequences of a clash between predator and prey.

Feeding the kestrel soon became an established part of my routine and when I was away staff in my gallery took on the job – some of them donning marigolds before they picked up the dead chicks. Before long I was ordering chicks by the 1000s and feeding barn owls and tawny owls as well. 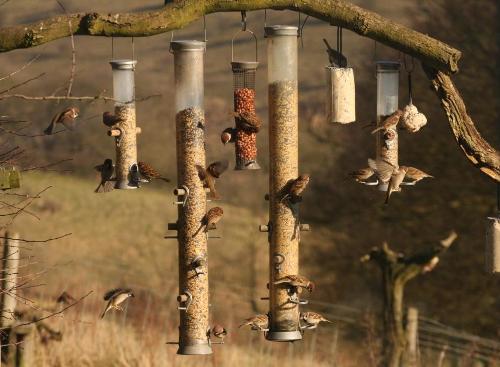 More than 60 species of garden birds visit my table over the course of a day and I begin each day by filling up the bird feeders and hanging fat bars. I usually serve a cocktail of wild bird seeds, which includes nyjer seeds for the goldfinches, peanuts for the blue tits, and sunflower hearts for greenfinches, tree sparrows and blue tits, and fat bars for woodpeckers and robins. I also sprinkle mealworms into a dish for dunnocks and wrens.

At mid-morning it's time for the kestrel’s breakfast: three dead chicks tied to the branch just above the dining table. Then at lunchtime another three dead chicks and another three at teatime. As the kestrel approaches, my other, seeding eating, dinner guests flit into surrounding tree cover and wait until it has gone before daring to resume their meals. Shortly before dusk, I cater for my nocturnal visitors, tying more chicks or mice to the same branches that the kestrel uses. At the peak of the breeding season this year I was supporting a kestrel family and a tawny pair with seven chicks. I was putting out an average of 30 to 40 chicks a day.

Look out for the story of my bird table on BBC1s The One Show this month. I will be posting news of its screening on my Facebook page. Search for Robert E Fuller.

Posted by Unknown at 11:42 AM 2 comments: Links to this post

Very excited to announce that this week I won a prize in the highly esteemed 2016 British Wildlife Photography Awards for a series of photographs I took of weasels in my garden.

The four pictures, which follow a weasel family from the the first flowers of spring to late winter snows, won the British Seasons category and go on show in a travelling exhibition that opened on Monday at the Mall Galleries in London.

I've only just returned from opening night where I got to meet and admire the incredible work submitted by the other contestants.

The judges told me that they chose my pictures because it is so rare for anyone to get close up shots of weasels in the wild.

Weasels are so small and lithe that it is very difficult to see more than a fleeting glimpse of them in the wild and very few close up portraits exist. Yet I took these in my own garden:

My winning shots go on show in my gallery in Thixendale from this week and this beautiful book, see below, featuring all of this year's BWPA winners can be purchased online by following this link to my website. 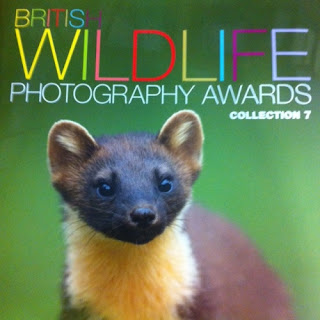 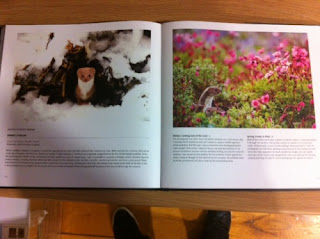 The story of how I got up close to these elusive predators was also featured this year on BBC's Springwatch. You can read the background to the tale of how I got close enough to a family of weasels to paint them by clicking here and, for all the latest on the weasels in the garden, click here.

Posted by Unknown at 10:20 AM 2 comments: Links to this post